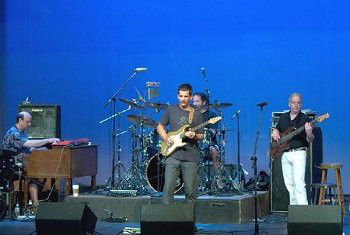 Since the 1980’s, A Helmet Of Gnats has existed. In the early 1980’s, they started as a cover band for progressive fusion. They played music by Chick Corea – Return To Forever, Frank Zappa and Bill Bruford. Later, they became an original progressive rock/fusion act. One of the most progressive bands, A Helmet Of Gnats, was the first to perform entire live shows with a midi sequencer. A Helmet Of Gnats performed and continued to write music in CT/NY throughout the 1990’s. Their first full-length CD was recorded in 1996 (an independent release that is now out of print). Their current lineup includes Chris Fox on Guitar and Matt Bocchino Keyboards, Wayne Zito, Mark Conese, and Mark Conese, Drums. They have since dropped the “A” and are now known simply as “Helmet Of Gnats”. From discogs