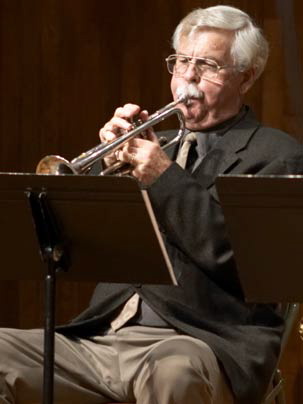 Despite his support for jazz legends like Stan Kenton and Charlie Parker, Herb Pomeroy’s technical skills and rich, lyrical tone are largely unheard. At the height of his talents, Pomeroy gave up performing to teach music and influenced subsequent generations of musicians from the classroom. Irving Herbert Pomeroy was born April 15, 1930 in Gloucester, MA. He discovered the trumpet through a film featuring Louis Armstrong. After spending a year at Harvard University’s dental program, Pomeroy enrolled at Boston’s Schillinger House, later renamed to the Berklee School of Music. At 23, he made his professional debut behind Parker. He recorded a quintet that was featured on The Bird You Never Heard and also performed live at Beantown clubs like Storyville and Hi-Hat. Pomeroy’s first national tour was behind Hampton. But the South’s oppressive racism took its toll. He returned to Gloucester to start his own 13-member orchestra and received much praise at a residency at The Stable. After completing his Kenton tour, Pomeroy returned to Boston, where he formed a partnership again with Serge Chaloff, a Boston baritone saxophonist. This led to cult-classic sessions such as The Fable of Mabel or Boston Blow-Up! He headlined his first LP in 1955, Jazz in a Stable. Two years later, he released the acclaimed Roulette album Life Is a Many Splendored Gig. He was not interested in studio work throughout his career, believing that jazz is best enjoyed live. Pomeroy, along with Charlie Mariano, Chaloff and the talented but ultimately unfulfilled pianist Dick Twardzik served as the Boston Jazz Workshop’s faculty. He began teaching at Berklee on May 5, 1955, and remained there for over forty years. His students included Gary Burton, Gary McFarland and Toshiko Akitoshi. Pomeroy agreed to take over the Massachusetts Institute of Technology’s student band. This group was so bad that Pomeroy later admitted that he had lied and said that he was too busy for the concerts. Pomeroy vowed to fix the ship, and later founded MIT’s Festival Jazz Ensemble. During his two-decade tenure, the FJE performed at the Montreux Jazz Festival, as well as other international showcases. He also premiered dozens of specially commissioned compositions. Pomeroy was also responsible for the creation of the first university curriculum dedicated to Duke Ellington’s music. He had briefly supported Ellington years before. Before he retired in 1995, Pomeroy was awarded the first Alumni Association Award by Berklee. He later earned an Honorary Doctor of Music degree. Inducted into the International Association of Jazz Educators Hall of Fame in 1995, Pomeroy was also inducted into the Down Beat Jazz Education Hall of Fame in 1997. Pomeroy, who was also a bassist, formed a duo with John Repucci and Donna Byrne to perform live. They also released the critically acclaimed album Walking on Air. Pomeroy, after a long fight with cancer, died in his Gloucester home on August 11, 2007.