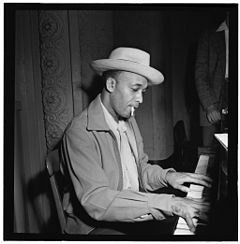 Herman Chittison was a talented stride pianist, whose technique sometimes overtook his style in the early days (it was more balanced by the end of ’30s). He started his career with Zack Whyte’s Chocolate Beau Brummels (1928-1931), which was a superior territory band. Clarence Williams recorded him, and in 1934, he traveled to Europe with Willie Lewis. He was a part of Louis Armstrong’s European tour in 1934. You can see him on film performing three numbers with Satch (Sweden) and a number of solo piano pieces. Chittison and the other sidemen went to Egypt with him after he left Lewis in 1938. They played there for two years until returning to the U.S.A in 1941. Chittison, who had worked with Mildred Bailey in 1941 on his trio, remained in New York throughout his remaining years. He recorded on an irregular basis for Musicraft and Columbia and ended up playing in Akron and Columbus, OH. Allmusic