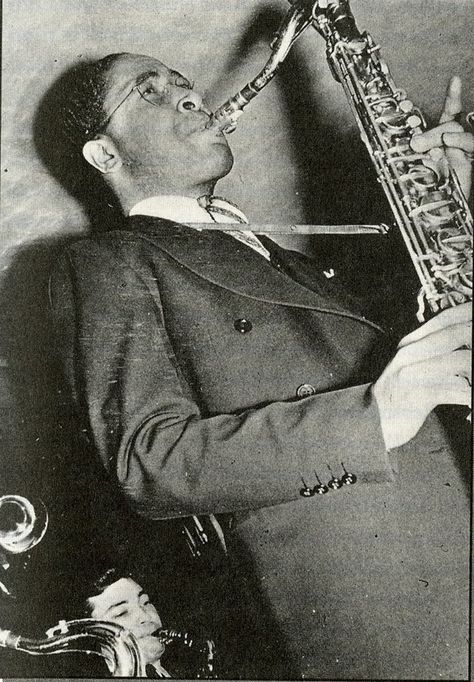 American tenor saxophonist Herschel “Tex”, Evans, was born March 9, 1909 and died February 9, 1939. He also had worked with Buck Clayton and Lionel Hampton. He is also well-known for inciting his cousin Joe McQueen to take up the saxophone. Evans was born in Denton Texas, United States. He spent part of his childhood in Kansas City where his cousin Eddie Durham, a trombonist, and guitarist, was. Durham convinced Evans to change from the alto to the tenor saxophone and that was what ultimately made Evans famous. Evans learned his craft through the jazz jam sessions that were held between Twelfth Street and Eighteenth Streets in Kansas City. He returned to Texas in 1920s and joined Troy Floyd Orchestra in San Antonio in 1929. Evans remained with the band until its dissolution in 1932. Evans was a member of Lionel Hampton’s Los Angeles band and Buck Clayton’s Los Angeles group. He returned to Kansas City in the mid-1930s to be a soloist with Count Basie’s big-band. Evans’s reputation for tenor saxophonist over the next three decades was unsurpassed. His duel with Lester Young, a fellow band member, are jazz classics. Count Basie’s “One O’clock Jump” showcased the contrasting styles and won both praise from critics as well as the general public. Evans’s biggest single success was his solo performance on Basie’s hit “Blue and Sentimental.” Evans recorded with jazz legends Teddy Wilson, Harry James, and Lionel Hampton. Evans is credited with having influenced Buddy Tate and Illinois Jacquet as well as Arnett Cobb, fellow tenorists. Evans was not a prolific composer but he did write a few popular songs, such as “Texas Shuffle”, “Doggin’ Around” and others. He died in New York City from heart disease on February 9, 1939 at the age 29. From Wikipedia