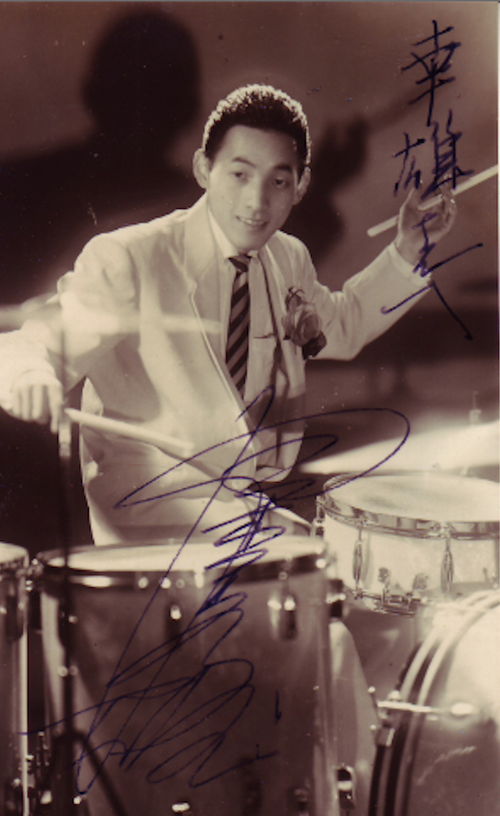 Hideo Shiraki (Bai Mu Xiu Xiong; born in Tokyo on 1 January 1933; died 31 August 1972 in Tokyo) was a Japanese drummer and bandleader. He is best known for his work during the 1950s and 60s. He was a pioneer in hard bop and later became a global jazz musician. Shiraki was a part of the Japanese jazz scene that emerged from the US occupation forces in the 1950s. He studied percussion at Tokyo School of Fine Arts. He also played during that period with Masashi Nagao’s Blue Coats. His quintet was popularized in Japan during the 1950s and 1960s as part of the “funky boom”, a craze for hard-bop. His quintet included Hidehiko “Sleepy”, Terumasa Hino, and Yuzuru Serai. In Fiesta (Teichiku Japon) 1961, which featured a version Benny Golson’s “Five Spot After Dark” was one of his most notable albums. Hidehiko Motmoto, tenor and flute, and Yuzuru Seraia, piano were among the performers on the album. 1965’s Sakura Sakura reunited the quartet (including Terumasa Hino on trumpet), with three female koto players, as Shiraki shifted to a world-jazz approach. Joachim-Ernst Berendt invited the quintet to perform at the Berlin Jazz Festival in November 1965. They performed with a koto band and were praised for their mix of jazz and traditional Japanese music. Toshiko Akiyoshi also recorded two tracks with him on their 1961 album Toshiko Meets Her Old Friends. Discogs