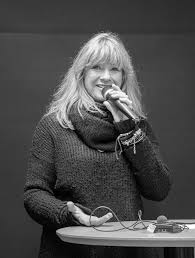 Hilde Hefte’s first solo album Down Beat was released in June. Hilde was a Barratt-Dues Music Institute student. She used piano as her main instrument. She plays alto saxophone and bb clarinet and has also studied acting at the Nordic Institute for Scene and Studio. She was a teacher at Vest Agder Music Conservatorium for one periode. She’s played many parts in plays, including Edith Piaf’s leading role. To great reviews, she’s released five solo albums: 1. An ode to Chet Baker, “Round Chet’s Midnight”, was named the album of year by Jazznytt Norway’s jazz-magazine Jazznytt. 2. This is a tribute to Bill Evans the pianist, “Playsong” – the music by Bill Evans. It was also her first CD and became the album of choice in Norway. 3. Hildes bossaHefte is a tribute the Brazilian music style Bossa Nova. This album was given by all Norwegian newspapers as a 5 or 6 on the dice. This is her first album in her native language. Her fourth album, which she calls her “memory album” (“On The Corner”) received wonderful reviews. She then went to Prague to record her new album with her band and The City of Prague Philharmonic Orchestra, “AN EVENING in PRAGUE”. It received outstanding reviews in newspapers and magazines as well as on NRK TV and Radio. Even a radio show live in New York gave her and the CD half an hour of airplay. Her band includes Egil Kapstad (NO), Bjorn Althaug (NO), Eyvind Walen (NO), Nisse Sandstrom (SE), Jan Allan (SE) and trumpet (SE (guest musician). Two tracks have been licensed recently for Japanese jazz CD’s. Finally, an album on which Hilde’s voice is the primary focus. “Short Stories” These are the most amazing reviews, with 5, 6, and 6 on the dice. Hilde Hefte was awarded numerous prizes and grants for her efforts. From facebook