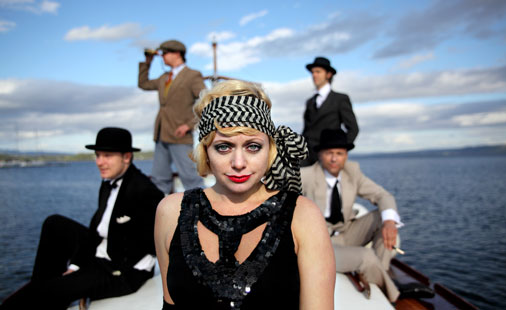 Norwegian media describe Hilde Louise Asbjornsen, a bestselling jazzartist and critically acclaimed jazzartist, as “three parts Monroe” and “one part Holiday”. She creates music and lyrics in her own style, influenced by American vocal-jazz, European cabaret, and the harsh winds blowing off the coast of Norway. Since 2004, she has released five albums of her own music and has toured the country performing both festival-concerts as well as club-concerts. Her album, “Sound Your Horn”, reached the top 40 in the Norwegian Charts. Hilde Louise is a strong performer on stage. Both her voice and movements give references to 1920s champagne, lushlife, and the dark underbelly of the glamorous surface. This is a concert experience that is matched by a stellar orchestra featuring some of Norway’s most acclaimed jazzmusicians. In 2007-2008, she performed with Swedish pop/jazz duo KOOP on tours in Asia, USA, and Europe. She was also the singer and coauthor of their single “Strangelove”, released in the US in autumn 2007 and in Europe in March 2008. Now Magazine, Toronto wrote: Hilde Louise Asbjornsen’s captivating stage presence stole the show. We wondered if her smoky, perfect rendition of Strangelove was a Britney. from http://www.hildelouise.com