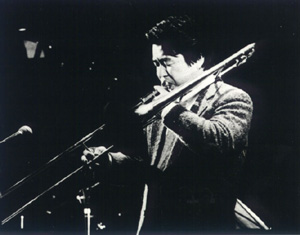 Hiroshi Fukumura, trombonist and leader; born in Tokyo 21 February 1949. While a law student, he signed up for Watanabe Sadao’s Berklee-styled Yamaha school of music. He joined Watanabe’s band after graduation (1971-1973). He studied at New England Conservatory, Boston, and performed and recorded in the student jazz band. After his return to Japan, he worked as a leader and sideperson with various groups. Performs with the fusion band Native Son (1980-1983). From http://www.jazz.com