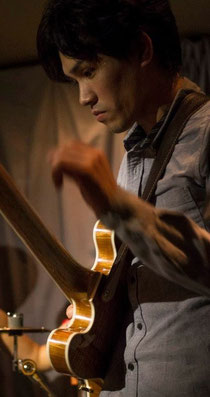 Hiroshi Fukutomi, guitarist and composer, was born in Osaka (Japan). At the age of 14, he began playing guitar. After graduating high school, he enrolled in Koyo Conservatory, Kobe, to learn jazz and classical guitar. He was awarded a scholarship by Berklee College of Music in Boston in 2003 and entered the school in fall 2004. Hiroshi studied at Berklee under the tutelage of Jon Damian and Bret Willmott as well as Bruce Saunders, Hal Crooks, Joe Lovanos, Joe Lovanos, George Garzone, Dave Santoro, and many other teachers. He was presented with the Guitar Department Achievement Award in 2006. Hiroshi now lives in Tokyo and performs, teaches, and leads his own quintet. His first album, “Rings Of Saturn”, was released in 2010. from https://hiroshifukutomi.jimdo.com