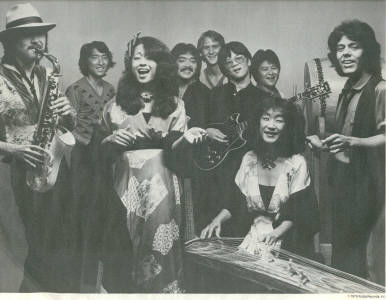 Hiroshima is an American jazz fusion/smooth jazz band formed in 1974 by Sansei Japanese American Dan Kuramoto (wind instruments and band leader), Peter Hata (guitar), June Kuramoto (koto), Johnny Mori (percussion and taiko), Dave Iwataki (keyboards) and Danny Yamamoto (drums). Named for the Japanese city of Hiroshima, the band is best known for the fusing of Japanese music and other forms of world music into its playing. Its early jazz-pop R&B sound gave the group a huge following among the African American community and they are regarded as musical pioneers among the Asian American and Japanese American community[citation needed]. Hiroshima’s debut album in 1979, the self-titled Hiroshima, contained the single “Roomful of Mirrors,” which caught the ear of the “easy-listening” community. Hiroshima became popular in the New Adult Contemporary community upon the release of its 1985 album Another Place, which spawned the crossover hit “One Wish.” One of the highlights of Hiroshima’s career was serving as the opening act for the Miles Davis 1990 world tour. Since then, despite moving towards new age music, the group continues to gain a wider audience for its music. June Kuramoto is the only founding member who is not American-born. She was born in Saitama Prefecture, a part of the Greater Tokyo Area in Japan and moved to Los Angeles at a young age. The band was featured in a 1976 documentary titled Cruisin’ J-Town, directed by Duane Kubo. The group wrote an original song titled “The Moon is a Window to Heaven” for the 1989 film Star Trek V: The Final Frontier. One of their songs from their 1987 album “Go,” “Hawaiian Electric,” was used for a TV ad campaign in Hawaii for The Hawaiian Electric Company, which featured June in the commercial. Hiroshima also composed the theme music for television cooking show Simply Ming hosted by chef Ming Tsai. Hiroshima is still active after 30 years of creating music. Its album, Little Tõkyõ, continues the group’s style of Jazz fused with Asian instruments and synthesizer, which sounds like no one else. In its personal statement the group said, “For us, its always about being different. Its vital to not be the same. We embrace our sound.” Legacy, a celebration of their 30th year in the recording industry. It is the first installment of what is expected to be a series. This initial album in the series is primarily a re-visitation of songs from the band’s first decade. Essentially recorded live at studio Tofuville, it features the six band members along with guest artists. Their latest album is titled Departure. It was initially released on Hiroshima’s Facebook page in December 2011, and is set for an official release in January 2012. from wikipedia