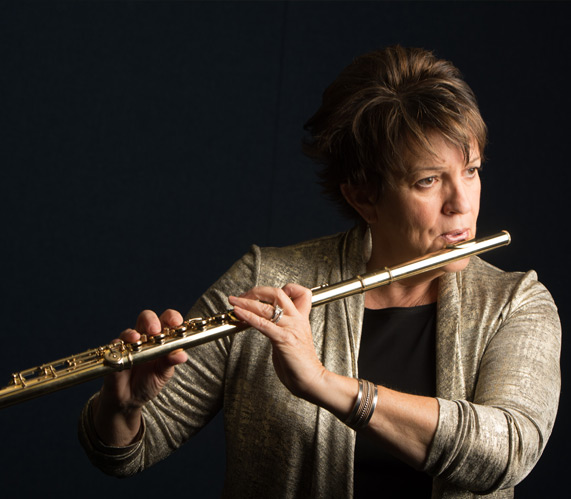 Holly Hofmann’s first memories as a musician are some of her fondest. At age 5 she would spend evenings playing a child’s flutophone, accompanying her father, a jazz guitarist, on standards from the Great American Songbook. It was an auspicious beginning for the woman who, after years of performing in classical ensembles, would find equally satisfying partnerships with such renowned jazzmen as Ray Brown, Frank Wess, James Moody, Kenny Barron and hundreds of other top names in the music. Today, Holly Hofmann has taken the flute from its middle-of-the-orchestra origins and made it a front-line instrument in jazz. She has earned the praise and respect of musicians and jazz aficionados for her bluesy, bebop-based improvisations and technical prowess on an instrument that many once regarded as definitely not a jazz horn. Hofmann has proven them wrong and critics have labeled her the most authoritative, swinging flutist — male or female — in jazz today. Born in Cleveland, Holly always had her head in music. Although jazz fans themselves, her parents insisted she have a solid foundation in classical technique. After high school at the prestigious Interlochen Arts Academy in Michigan, she gained her formal education through studies with the Cleveland Orchestra’s principal flutist Maurice Sharp. She then earned her bachelor’s in music degree from the Cleveland Institute of Music and her graduate degree from the University of Northern Colorado. During summers away from school, Hofmann would travel to New York to study with Frank Wess and Slide Hampton and began sitting in at jam sessions, learning the necessary jazz standard repertoire. It was their encouragement that convinced her to pursue a career in jazz flute. Following graduate studies in Colorado, Hofmann moved to San Diego, California in the late-1980s and began working with pianist Mike Wofford and bassist Bob Magnusson, both long-time stalwarts of the California jazz scene. Her first CD Take Note was recorded with them and drummer Sherman Ferguson in 1989 for Capri Records. It was during her early years in San Diego that Hofmann began booking a four-night-a-week national jazz program at the Horton Grand Hotel and other San Diego area venues, presenting hundreds of nationally acclaimed artists including Diana Krall, Cassandra Wilson, Tommy Flanagan and Joe Henderson. She also began performing nationally with pianist Bill Cunliffe, a partnership that led to several recordings in duo and other configurations for Cleveland-based Azica Records. They recorded Just Duet, Vol. 1 and 2 and Live at Birdland in a quartet with bassist Ray Brown and drummer Victor Lewis. The pair toured extensively playing festivals and chamber venues worldwide and performing both jazz and classical compositions in brilliantly seamless arrangements. Hofmann began working with the legendary Ray Brown at New York’s Village Vanguard in the mid-‘90s and later toured throughout the United States and Europe with Brown’s trio as a guest artist. She credits Brown’s support as one of the major turning points in her career and recalls that each performance with him was a learning experience. Hofmann and the highly respected pianist/arranger Wofford married in 2000 and the two toured in a quartet with Brown and Lewis. Besides her work with Slide Hampton and Frank Wess, Hofmann has collaborative with Kenny Barron, Cedar Walton, John Clayton, Houston Person, Regina Carter, Terell Stafford and Kevin Mahogany, among many others. Of the Hofmann/Wofford release Minor Miracle, George Carroll of Jazzreview.com wrote, “…virtual torrents of fresh, rhythmically and harmonically inventive ideas and melodies …. ” The couple also toured and recorded with Flutology, an all-star sextet featuring Wess, Ali Ryerson and Hofmann on flutes, with Wofford, bassist Peter Washington and drummer Ben Riley. Norm Weinstein of All About Jazz called Flutology’s performance in New York “singular and breathtaking.” Still a resident of San Diego, Hofmann performs extensively across the globe. She remains involved with jazz booking, something she feels strongly about, and consults on several jazz parties and festivals, including Jazz at Newport in Oregon and Jazz in North Park in San Diego. She continues to record critically acclaimed CDs for Denver-based Capri Records. Her 2010 release Three’s Company with Bill Cunliffe features several special guests including trumpeter Terell Stafford, violinist Regina Carter and clarinetist Ken Peplowski. Her 2012 release, due out in January, is a quintet project with Wofford and Stafford titled Turn Signal. Hofmann also teaches jazz and flute and conducts master classes at schools and universities around the country. She is on the Board of Directors at Keynote Jazz Foundation which provides concerts and clinics in high schools and middle schools in the United States. With twelve recordings as a leader in the duo or quartet setting, Holly Hofmann is earning respect for the flute as a jazz instrument. Audiences and promoters recognize her as one of the premiere jazz flutists in the world, and alto great Phil Woods, while describing her performance at the Telluride Jazz Festival, said “Along with Hubert Laws, Holly is frankly the best jazz flute player today.” She has become the standard by which jazz flute is being judged. – T. Michael Crowell, Froggerdogger.com