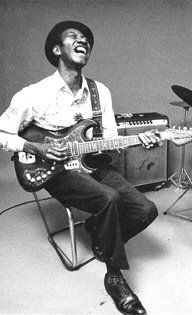 Alligator Records, Chicago’s top contemporary blues label would not have been possible without the slide guitar antics of Hound Dog Taylor. Bruce Iglauer was an employee at Delmark Records when he couldn’t convince Bob Koester of Taylor’s potential. So Iglauer decided to take matters into his own hands. Alligator was created in 1971 with the sole purpose of releasing Hound Dog’s debut album. We all know the outcome. Taylor, a Mississippi native, was named after President Theodore Roosevelt. Taylor started playing guitar at the age of 20. Before moving to Chicago in 1942, Taylor made a few guest appearances on Sonny Boy Williamson’s legendary KFFA King Biscuit Time radio broadcasts from Helena, Arkansas. Taylor would not make blues his full-time profession for another 15 years. Taylor was a popular performer on Chicago’s South-West sides in the late 50s and early 1960s. Freddy King is believed to have gotten a large portion of his “Hide Away”, which he learned from Taylor on the bandstand. Taylor’s credits before Alligator were very limited — he only had a single in 1960 for Cadillac Baby’s Bea