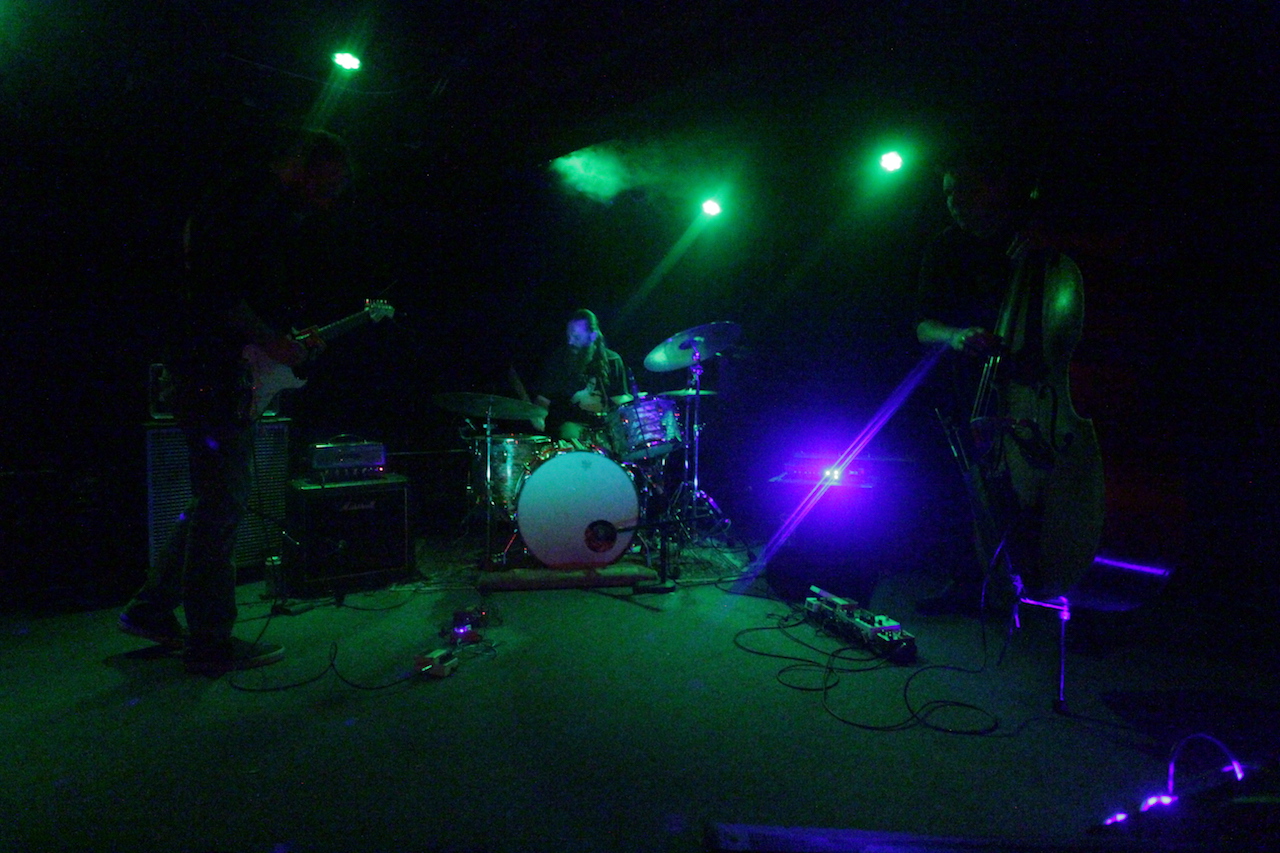 Hound Dog Taylor’s Hand is Jeffery Taylor (guitar), Greg Kelley (trumpet), John Seman (contrabass), and Mark Ostrowski (drums). Taking its name from the six-fingered blues slide guitarist, the group creates spontaneous compositions rooted in the language of the blues and free jazz. Taylor weaves guitar improvisations like themes through a sermon, fanning the flames of the long-time rhythm section of Seman and Ostrowski, while Kelley introits righteous and wicked with a choir of amplified trumpet. Reverence for the roots of improvised music meets an unbridled passion to push boundaries, making for a propulsive and unpredictable sound. Having a tangential relationship with jazz hasn’t hindered the progress of Hound Dog Taylor’s Hand (named after the late Chicago blues guitarist’s six-fingered left hand); if anything, it’s helped them to shred the decorum of jazz niceties. The band relies largely on “improvisation, swing, and the harmonic and melodic context of the blues.” Speaking as a collective, they say, “The blues in jazz is fundamental, yet it is not sacred. As the blues by definition can never be sacred, so must jazz be free of dogma even as it develops spirituality.” These veterans of Seattle’s avant-garde-jazz and underground-rock scenes— guitarist Jeffery Taylor (Climax Golden Twins/Spider Trio), bassist John Seman (Ask the Ages), and drummer Mark Ostrowski (Wally Shoup Quartet)—may be the group here most at odds with conventional notions of jazz. “Our role as present-day spontaneous composers in the idiom of improvised music is to honor as well as challenge the foundational understanding of music, its social and political context, and its expectations and implications. The three of us are voracious listeners with wide-ranging tastes, and by that virtue, certain inflections are bound to creep in. We are distilling our influences and knowledge of various music into real-time improvisations. Paramount to playing freely improvised music is close listening and reaction to what each instrument is doing individually. This is a central tenet to jazz, whether composed or freely improvised. Mostly, though, we just like to rock the fuck out.” ​ Like many Seattleites who make adventurous music, HDTH lament the loss of the city’s “underground crevices and backdoor corridors. This has wrought calcification at traditional jazz outlets, where the far-out and unexpected is unwelcome and rock clubs don’t want to hear that you are a ‘free-jazz’ or ‘improvising’ band. That shit doesn’t sell drinks.” ​ At their best, though, HDTH make getting drunk redundant. Their music—an artful conflagration of noise rock and free jazz, hinting at the explosive power and jagged dynamics of guitarsonists Sonny Sharrock and James Blood Ulmer and the high-flying fusion of Mahavishnu Orchestra drummer Billy Cobham’s Spectrum—will more than help you get out of your quotidian mindset. HDTH’s new self-titled album (out November 11 on Abduction Records) isn’t all pyrotechnics, however. It occasionally veers into moments of tender meditativeness, as exemplified by “Relax, It’s Okay” a companion piece with the Jimi Hendrix Experience’s “Castles Made of Sand.” For those who are ready to embrace dissonance and scrupulously modulated chaos, this record’s going to turn heads and blow minds. from http://hounddogtaylorshand.com