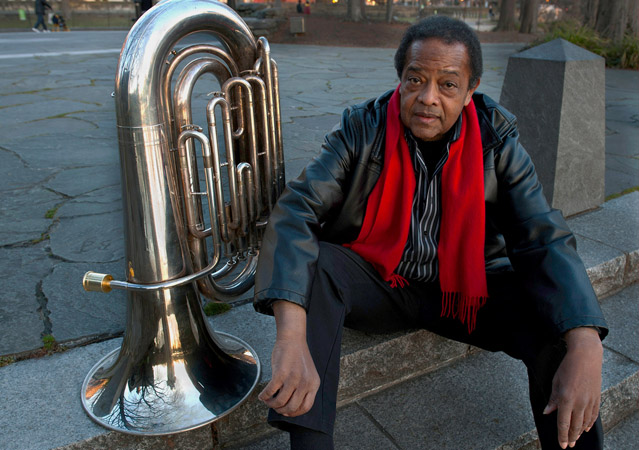 Howard Lewis Johnson, born August 7, 1941, died January 11, 2021. He was an American jazz musician. His main contributions were on the tuba and baritone, but he also played trumpet, bass clarinet and other reed instruments. Johnson is best known for his extensive sideman work, including with Hank Crawford and George Gruntz. He was the leader of the tuba group Gravity, and released three albums for Verve Records in the 1990s. The first, Arrival, was a tribute, to Pharoah. Johnson was born in Montgomery in Alabama, but was raised in Massillon in Ohio from the age two. He was a self-taught musician and began playing tuba and baritone saxophone in high school. He graduated in 1958 and served in the U.S. Navy. After that, he moved to Boston with Tony Williams’ family. After a brief stint in Chicago, he met Eric Dolphy and moved to New York City in 1963. He worked in the 1960s with Charles Mingus and Hank Crawford, Rahsaan Kirk, Archie Shepp and Hank Mobley, on the album A Slice of the Top. In 1966, he also started a long-lasting association with Gil Evans. He was arranger of a horn section that backed Taj Mahal on Mahal’s 1971 live album, The Real Thing, which featured three other tubists/multi-instrumentalists, Bob Stewart, Joseph Daley and Earl McIntyre. Johnson was also a member of the Band’s Rock of Ages live album The Last Waltz, and continued to perform with Levon Helm’s group into the 2000s. He was the Saturday Night Live Band’s live band conductor in the 1970s. You can see him in many musical numbers, including the “King Tut” sketch, where he plays bass saxophone. He also co-led three tuba bands with Tomasz Stanko and Substructure. Tuba Libre, Tuba Libre, Gravity were his most well-known bands. He is a prolific recording artist. He performed at the Woodstock Jazz Festival in 1981 to celebrate the tenth year of Creative Music Studio. He was Wendell’s replacement in the 1983 film Eddie and the Cruisers. He also appeared on episodes of Matlock, Hill Street Blues and others. He was part of the Gil Evans Orchestra that accompanied Jaco Pastorius to the Live Under The Sky Festival, Japan, in 1984. Johnson was a part of James Taylor’s 1983 performance of “Jelly man Kelly”, and also played the tin whistle during Taylor’s rendition to Oscar the Grouch. Johnson was the father of Nedra and David. David (1964-1999) was an actor from New York and lived in Brooklyn. Nedra was a blues musician and singer. Johnson passed away on January 11, 2021, in his New York home. Source: Wikipedia