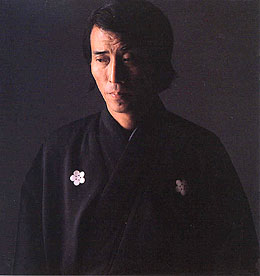 October 6, 1937 – Feb 10, 2014 Shakuhachi Hozan Yamamoto was a performer, teacher and composer who led the expansion of the possibilities for the shakuhachi. He graduated from the Seiha Music College in 1962. He was a founding member of the highly acclaimed “Shakuhachi Sambon Kai” trio, which was formed with Katsuya Yamamoto and Reibo Aki in 1966. In 1967, he began to electrify the traditional scene by utilizing his talents in a wide range of cross-cultural collaborations that started with jazz in 1967. These led to him working with world-renowned musicians like Jean Pierre Rampal and Ravi Shankar. He was a leader in shakuhachi, receiving numerous honors over the years, including Ministry of Cultural Affairs and Education Ministerial Awards for his performances, recordings, compositions and compositions. He was a lecturer at The Tokyo University of Fine Arts and Music. From www.komuso.com, Designated Living National Treasure in 2002