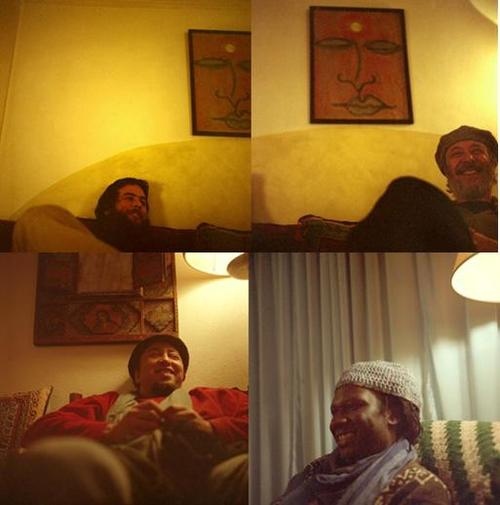 Boonghee is a new dance music that there is no specific rhythm to. It’s a gathering of grooves. Boonghee is onomatopoeia. You feel it in your ass. Lead by the pillow-padded-mallet-hit deep bass resonance and high-pitched hand slaps of the Udu clay drum of West Africa, Boonghee Music is very circular and profound. Something like a phenomenon, and somewhat a mixture of minimal hip hop, Big Black hand drumming, and broken-beat, Boonghee Music is all organic, with no electronics, save for the recording apparatus. The colors atop the drums are vast and streaming and can come from any kind of instrument; primarily they are percussive. A few in the collection used for these recordings are dusun’goni, sintir, thumb pianos, harmonium, batajon, talking drums, dumbeks, and flutes. Bringing this music to life are two incredibly gifted drummer/percussionist /composers from Chicago that have been running together since they were 14. Adam Rudolph & Hamid Drake met in a drum shop on the East Side of Chicago and later took classes together with local A.ssociation for the A.dvancement of C.reative M.usicians elders. Today, some 30 years past that genesis, the two are world-renowned in many circles of music for their very special, expressive styles and range. From, Pharoah Sanders, Yusef Lateef, Joseph Jarman, Bennie Maupin, the late Don Cherry and many others famous for their contributions to so-called jazz, Rudolph and Drake have put there mark on many important groups and eras. From Drake’s touring with avant garde bassist Fred Anderson, session work with Bill Laswell and many other projects in between, and Rudolph’s Meta Records catalogue of independently produced albums with his group Moving Pictures, opera recordings, and many an experimental set with Yusef Lateef, the two keep very busy. You will find an 18 year old Rudolph playing congas on the Strata album Maulawi and you will find Rudolph, Drake, Foday Mussa Suso and Don Cherry on the obscure late 70’s recording Mandingo Griot Society. The list of artists that these two have played with is too long to give here. Hassan Hakmoun, Lester Bowie, Joe Bowie, Kenny Cox, . . . it’s realy long. Occasionally making time for their own ideas to come together in a duet style – Hu Vibrational was born the last time Drake made it to Los Angeles and the two decided to make a dance record. 2000.Rudolph decided it felt like Boonghee. And so it is. Completing the Hu Vibrational trio is producer Carlos Nño. A frequent collaborator of Rudolph’s and a local rising dj/producer talent, Nino served as a co-musical director for the sessions herein and was asked to set tempos, outline rhythms, select instruments for texture and design the sound. Not yet well known outside of Los Angeles, Nino is making a good deal of noise with his production of concerts (from the Pan Afrikan Peoples Arkestra, Gary Bartz NTU Troop, Terry Callier and Gil Scott-Heron & Brian Jackson to Saul Williams, Divine Styler, Blackalicious and DJ Shadow & Cut Chemist,) records (by jazz vocalist Dwight Trible “Horace”, Adam Rudolph Go: Organic Orchestra: 1 and Dublab Presents: Freeways) and instrumental hip hop (check out the debut of his group Ammoncontact forthcoming on East Devs.) We at Eastern Developments are glad to have swooped him up. Such is a similar sentiment of Rudolph & Drake. Nino named the group inspired by his reading of Hazrat Inayat Kahn’s book “The Music of Life,” highly suggested reading to him by Rudolph. “Hu” being a supreme sound as explained by H.I. Kahn and vibrational, a word relating to vibration with the added suffix “al” which is also a sound said to be in tune with the divine. Rolling off the tongue, vibrational. So, in essence, the group is making some next level dance music. Like, rock the party, the body, and the spirit. Rock meaning touch or uplift or make you move. from discogs