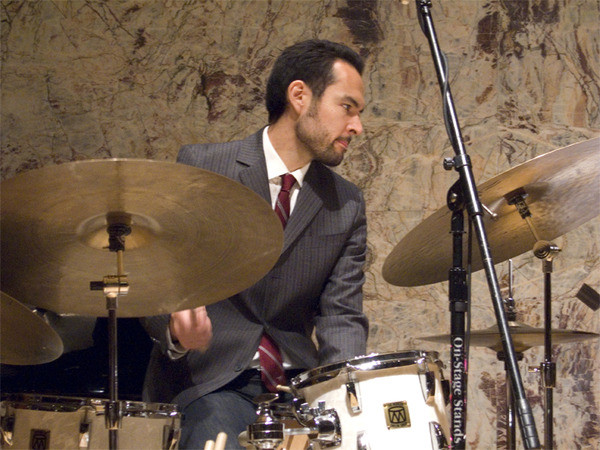 Ingar Zach, a Norwegian percussionist, was born 29 June 1971 in Oslo. He is also a businessman. Zach was a member of Chateau Neuf Splemannslag, and ‘Harnihomba’ in the 1990s. He also studied music at the University of Oslo (1993), and composition at Trondheim Musikkonsevatorium (1994-1997). He released two albums with Hakon Kornstad (saxophone), and David Stackenas (“guitar”) as part of the trio ‘Tri Dim’ (1997-2000). He formed the record label Sofa with the steel guitarist Ivar grydeland, and released improvisational music (2000). This collaboration led to a master’s in improvisation (2004), as well as the trio Huntsville, including Tonny Kluften (five album, 2013). Zach was also a member of a duo with Derek Bailey (1930-2005), the Norwegian ditto Anders Hana. He played in the trio “No Spaghetti Edition” (four albums) and in the orchestras Batagraf, and Magnetic North Orchestra, led by Jon Balke. Zach has also played on the releases of Karl Seglem, Carl Petter Opsahl. He currently resides in Madrid (2004) and runs the record label Sillon, a subsidiary of Sofa. Grydeland is his manager.