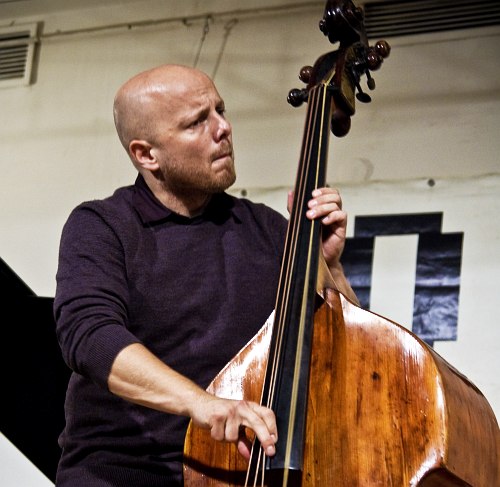 Ingebrigt Haker Flaten (b. 1971, Oppdal – Studied Jazz at Trondheim’s Music Consevatory (1992-1995), under the guidance of Odd Magne Gridseth, bassplayer. One thing that is striking about the great jazz bassists of modern times is their open-mindedness and willingness to experiment with different styles. William Parker, Malachi FavorsMaghostut and Peter Kowald are just a few of the great bass players. Their diverse musical tastes have been reflected in their varied techniques. Norwegian composer and bassist Ingebrigt Flaten is also an artist. Flaten found his home in Austin, Texas, after he was able to join bands and learn from musicians with very different concepts. Flaten is a muscular player with a tone and approach that resembles Paul Chambers and Buschi Niebergall. His openness and control serve ensembles such as The Thing and Free Fall. Flaten is the founder of the Chicago Sextet, Austin-centric Young Mothers and has recorded and performed with Frode Gauci, Dave Rempis and Bobby Bradford. He also records and performs with Ken Vandermark and many others, including Tony Malaby and Daniel Levin. Flaten was a Trondheim Conservatory student (1992-1995). He became a professional musician shortly afterwards. However, his willingness to try new things with different musicians, whether they are professionals or amateurs, puts him in a unique class: a truly open-minded artist. Flaten has been able to develop his music and live it under his own steam, drawing on influences such as Derek Bailey, George Russell and Chris McGregor. He also draws from Ingmar Bergman and contemporary pop melody, gritty punk, and everyday sounds and sights. All great artists share a calmness and self-assurance that is evident in their diverse work. Flaten’s art is often found in a collective, leaderless group. In fact, it was only after a decade of professional musicianship that Quintet (Jazzland) was released. A Sextet recording will be coming soon. Flaten said that he relies on people who are close to him, partly because of the need for a copacetic environment. Although it’s great to have your own band, you must ensure that the music is not limiting. It’s also inspiring. In 2011, he formed another ensemble, The Young Mothers, which includes drummers Stefan Gonzalez (Dallas) and Frank Rosaly (Chicago), trumpeter/poet/rapper Jawaad Taylor (New York), saxophonist Jason Jackson (Houston), and Jonathan Horne (Austin) on guitar. Flaten’s philosophy, aesthetics, and musicianship will all be seen through this group, which has varying levels of influence. As it grows organically, it will become another great lens. He will be able to help established ensembles spread their influence while also experimenting with new relationships and building them. from http://www.ingebrigtflaten.com