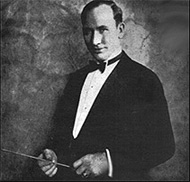 Isham Jones was a leader and broke up many bands in the 1920s and ’30s. But his greatest legacy was as a songwriter. He wrote “It Had to Be You,” On the Alamo,” I’ll See You In My Dreams,” “The Love I Love Belongs to Someone Else,” and “There Is No Greater Love.” Isham Jones was an original saxophonist, pianist, but he never took solos with his bands. His outfit included Louis Panico, a trumpeter who was a great soloist in 1921. Jones recorded a lot between 1920 and 27. Most of his recordings were jazz-oriented performances in dance bands. Although his recordings from 1929-1932 are less commercial, the musicianship was high and the melodic renditions were not without interest. When Isham Jones decided that he wanted to temporarily retire, Jones’ big band from 1932-1936 became the core of the first Woody Herman Orchestra. Although he had a second band in 1937, and they recorded as late as 1947. His songs will be his most cherished memory. Allmusic