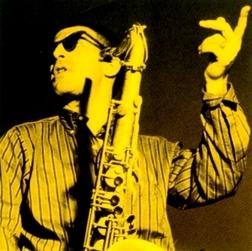 J. R. Monterose (1927 – September 16, 1993), was born Frank Anthony Peter Vincent Monterose Jr. in Detroit. He was an American jazz tenor and occasional soprano saxophonist. J.R. (derived from Jr.), Monterose was born in Utica, New York. His family moved to Utica a few months later. At thirteen, he began clarinet lessons. However, he was largely self-taught as a tenor saxophonist after hearing Glenn Miller’s soloist Tex Beneke. He was influenced by Coleman Hawkins, Chu Berry and others, but he said to Leonard Feather that he found stylistic inspiration in Chu Berry and Coleman Hawkins. However, he did find harmonic inspiration in pianists. He cited the example of Bud Powell, and Sam Mancuso, Utica-based guitarist, who taught him how to use chord changes. Monterose was born in 1947 and he played in the upstate New York Territory dance bands from 1947 to 1949. He joined Henry Busse’s traveling orchestra in 1950. In late 1951, he rejoined the Buddy Rich big band after a brief stay in Utica. Although the band featured some great bop-oriented musicians (Rich and Dave Schildkraut), Allen Eager, Philly Joe Jones, and Allen Eager, he quickly left the group, citing a lack of soloing opportunities. In a 1956 interview, he stated that he was “drugged” with his own playing after six months. He then returned home to spend the next two years in small joints with good men. Monterose performed in New York City from the mid-to late 1950s as a soloist with Claude Thornhill and vibraphonist Teddy Charles. He also played with Charles Mingus’s Jazz Workshop and Kenny Dorham’s Jazz Prophets. Monterose said that Dorham was “one of the greatest leaders and player I ever played for”, according to Mark Gardner, a 1975 critic. . . . He is a wonderful musician. He was also a great musician. The Monterose life is a story of sporadic itinerancy. He pursued his ever-evolving craft in small U.S. venues and over extended stays (late 1960s to mid 1970s) in Belgium and The Netherlands. There are also occasional low-profile recordings like In Action, Body and Soul, which were recorded in places such as Cedar Rapids (Iowa) and Wageningen (The Netherlands). His preference for working in small groups in remote locations would influence much of his career. This contributed to his musical growth, but eventually he was relegated to obscurity. Monterose spent the last ten years of his life gigging at various venues in upstate New York, including the Lark Tavern. Croscrane Records has released live recordings from the Lark Tavern and other venues in upstate New York such as Opus 40. A 1981 duet recording of Monterose with Tommy Flanagan (A Little Pleasures, Reservoir), shows Monterose at his finest and includes some rare and exceptional soprano work. Storyville has released the T.T.T. album that was recorded by Danish Broadcasting during his 1988 visit to Copenhagen’s Jazzhuz. You can also find other live recordings of his last years, which were recorded by Danish Broadcasting. Although Monterose was considered an underground musician, his contributions as a player and composer are still highly regarded by critics, musicians, and fans of classic jazz. Although he never denied being influenced by John Coltrane and Stan Getz, he refused to be defined in any way. “I have tried my whole life to avoid copying. It’s not worth being jazz if I can’t be me. David Brent Johnson, a jazz historian and writer, referred to Monterose as “The Greatest Tenor You’ve Never Heard.”