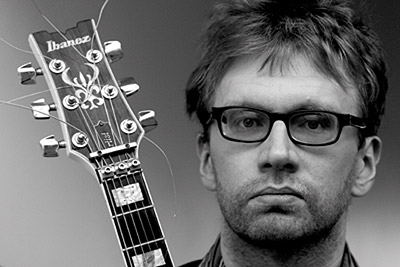 Jaak Sooaar (b. Born in Tallinn (Estonia) on February 22, 1972. He graduated in 1994 from Tartu University (majored international economics), in 1996 from Tallinn’s Music College, and in 2001 from Copenhagen’s Rhythmic Music Conservatory. Since 2001, he has taught the ensemble and guitar at the Jazz Music Department of Estonian Academy of Music and Theatre. He was also the Head of that Department from 1996 to 2000. In 2010, he was elected a professor. He founded Estonian Jazz Union in 2004. Since then, it has been a very successful promotion of jazz in Estonia and Estonian music abroad. From 2004 to 2009, he was Chairman of the Board. Since 2009, he has been the Deputy Chairman and Head of Foreign Affairs. Sooaar was seven years old when he began singing in the Estonian Boys Choir. Since 1989, Sooaar has been active in Estonian jazz and pop music. Since the late 1990s, Sooaar has performed with many internationally known jazz musicians, including Tony Allen, Ray Anderson, Conny Bauer, Han Bennink, Raoul Bjorkenheim, Gavin Bryars, Will Calhoun, Kent Carter, Pierre Dorge, Daniel Erdmann, Arkady Gotesman, Mikko Innanen, Anders Jormin, Dave Kikoski, Alexey Kruglov, Dave Liebman, Joe Lovano, Ron McClure, Karlheinz Miklin, Liudas Mockunas, John Schroder, Louis Sclavis, Harri Sjostrom, Vladimir Tarasov and Petras Vyshniauskas, and has been active in several international bands, including The Dynamite Vikings, Erdmann/Sooaar Dessert Time (1st prize at international Peer Gynt Improvisation Contest in Parnu, Estonia, in 2001), Heavy Beauty, Kruglov-Sooaar Quartet, Sooaar/Yaralyan/Ounaskari and Almost Zebra (3rd place at the 5th European Improvisation Tournament in Poitiers, France, in 2001). Sooaar was a guest soloist with WDR Big Band in Germany (May 2006). Sooaar was a member, in 1999, of The European Jazz Youth Orchestra. In 2003, he also toured with the EBU Big Band, Istanbul, Turkey. Eesti Keeled was awarded the Estonian Music Award in 2005 and 2003 for being the best etno/folk musician. In 2013, the quartet “Mustonen-Sooaar-Remmel-Ruben” received the Estonian Music Award for the best jazz artist with album A Tempo (AVA Muusika). Sooaar received the Estonian Jazz Award for the first time in 2007. He also received the Estonian Culture Endownment award (Eesti Kultuurkapital) every year. Jaak Sooaar has released more than 30 CDs. Visit www.jazz.ee