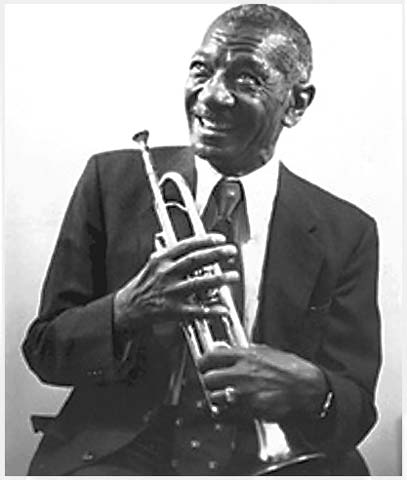 Virginia, there was indeed a JabboSmith! Jabbo Smith had a brief but very important recording career in late 1920’s. He was the first trumpeter to challenge Louis Armstrong and his virtuosity was years ahead its time. His work was a major influence on Roy Eldridge who helped to develop Modern Jazz. Jabbo Smith, the son of a church organist and barber, was born in Pembroke in Georgia on Christmas Eve 1908. When Jabbo was four years old, his father died. He moved to Savannah at the age of six. His mother was unable to care for him so at six years old, Jabbo was admitted to the Jenkins Orphanage Home in Charleston. In order to be close to her son, his mother found work at the Home. Music education was a major focus at the Jenkins Home. Many important Jazzmen gained their first playing experience touring with one or more student orchestras. Jabbo began playing the trombone and trumpet in this setting at age eight, and began touring the country as a member of a student band when he was ten. Jabbo left the institution at sixteen after a series of unsuccessful attempts to leave. He moved north to make music his career. Jabbo made (and kept) a promise that his mother would never allow him to work less than 100 dollars per week. This was a decent wage back then. Jabbo worked in many top bands including Charlie Johnson’s Paradise Ten, which featured Benny Carter as the arranger, and Duke Ellington. He also played Bubber Miley on a 1927 Okeh recording, Black and Tan Fantasy. Jabbo declined an offer to join the Ellington Orchestra, 1927, because he was only offered $65 per week. It is hard to imagine the wonderful music this collaboration could have produced. Jabbo was a member of the Broadway pit band Keep Shufflin’ in 1928, where he played with Fats Waller (organ), James P. Johnson(piano) and Garvin Bushnell (“alto). Under the name Louisiana Sugar Babes, he recorded four sides. Jabbo was left stranded in Chicago, 1929, while on the road with Keep Shufflin’ following the gangland murder of Arnold Rothstein. Rothstein is also well-known as the notorious fixer of the 1919 Chicago Black Sox World Series. Jabbo was an experienced Jazz musician by this point and Chicago had plenty to offer. Mayo Williams, the Brunswick Record Company of Chicago asked him to form his Rhythm Aces. This quintet recorded 19 sides between January and August 1929. Jabbo’s vocal and trumpet playing is exceptional. The work was considered too complex or difficult, and the records were never accepted by the general public. They have been forgotten since then. These records were of greater importance because Roy Eldridge was attracted to them. He incorporated some of Jabbo’s technical explosive, chance-taking speed in high register and explorative style into the way he played. Roy Eldridge claims that he lost a musical battle to Jabbo in l930. “Jabbo Smith caught him one night and turned my every way except loose …. He wore me out before it was over.” He was able to play a variety of music and know a lot . Roy Eldridge is the only trumpeter who could beat him in a cut session. Roy had a profound influence on Dizzy Gillespie’s playing, who was one of the founding fathers of Modern Jazz. Gillespie’s playing during the period 1938-1942 is virtually indistinguishable to Roy’s. Jabbo was thus a crucial link in modernizing jazz trumpet style. He played with King Oliver, Louis Armstrong and Jabbo Smith. Jabbo stopped playing serious music towards the end of 1930. For a time, he led a group at the 1939 World’s Fair. He also gigged in the Alcazar in Newark, N.J. He encouraged a 17-year-old Newark singer to join him at the Alcazar to perform in a talent show at Harlem’s Apollo Theater. She was awarded the prize and she got her start. The Singer? Sarah Vaughn, the Divine One. Jabbo had a talent for talent! Jabbo soon moved to Milwaukee, where he got married and began playing in the local music scene. He also had the security of a job at a car rental agency, which was a stable job. Jabbo Smith, one the most important and influential trumpet players in Jazz, remained silently oblivious for over twenty years. This was a terrible musical loss. Jabbo was finally rediscovered in 1960. After recording two albums, his style was not as great as it used to be. He also appeared in One Mo’ Time in 1979. He was also a regular at Jazz festivals and toured Europe, performing at the Village Vanguard and at the Bottom Line, as well as at the West End Cafe and Village Vanguard in New York. In Berlin, 1986, Don Cherry, an avant-garde trumpeter, was one of his final public performances. Jabbo Smith, a Savannah native, was inducted into the Coastal Jazz Hall of Fame in October 1990. This nomination was based on his significant contribution to Jazz History. Although he was quickly accepted, he had suffered a stroke in May 1990 and was currently living at the Village Nursing Home in New York. Jabbo, who was 82 years old, died in January 1991. However, his best friend Lorraine Gordon, the Village Vanguard owner, learned of his acceptance into the Hall of Fame. I had the privilege of presenting Mrs. Gordon the Award. She was in Savannah to witness the induction ceremony in May 1991.