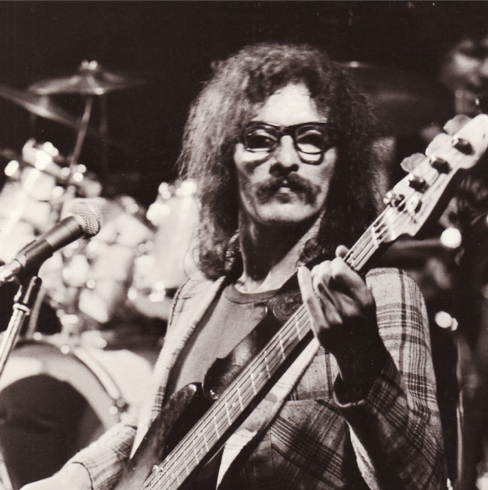 Miklos Jozsef Orszaczky, born 8 May 1948 in Budapest, Hungary, and died 3 February 2008 in Sydney, Australia. He was a Hungarian/Australian musician, arranger/vocalist, record producer, and vocalist. His musical styles were jazz, blues and R&B. He also played funk and progressive rock. From the early 1990s, he used a modified picolo bass, but also used various other instruments. The Hungarian government awarded Orszaczky the Knight’s Cross of Merit in 2006. Orszaczky, who was 59 years old, was also diagnosed with Hodgkin’s lymphoma that same year. He died on February 3, 2008 at the age of 59.
Jackie Orszaczky was conceived as Miklos Jozsef Orszaczky in Budapest, Hungary on May 8, 1948. His father, Laszlo Orszaczky was an engineer. His mother was Giselle and his brother, Laszlo Orszaczky. His family lived in District 8: Jozsefvaros, English: Josephtown, where he learned classical piano and violin from the age 5 years. Orszaczky listened to the Spanish and AfroCuban records of his father and local gypsy music. The Orszaczky family fled to their cellar during 1956’s Hungarian Revolution. They emerged to find their house with bullet-ridden walls, and streets littered with bodies from people who were killed by tanks. Orszaczky was part of the 60-piece orchestra at his school.

Jackie Orszaczky, a 1965 student at Dugonics Utcai Altalanos Iskola in Josephtown, started a rock band called Uj Rakfogo. Miklos Cserba was a guitarist, Laszlo Mgyorossy was a guitarist, and Lakatos Bogoly Bela (aka “Horse-fly Locksmith”) was a drummer. His brother Laszlo Orszaczky (1966-67), Mezei aniko (vocals) and Vadasz “Ferike,” on guitar were later added. They would perform in local clubs until dawn. Orszaczky would stay up late and miss so many school because of his low attendance, he was expelled. Orszaczky joined Syrius, a jazz-fusion and progressive rock band, in 1969. He played bass guitar, guitar, and sang. Syrius also included Zoltan Baronits, who played saxophone, oboe, and piano; Latsi Pataki, who played organ, piano, and drums; Mihaly Raduly, who played flute, violin, and saxophone; and Andras Veszelinov, who played drums, guitar, and trombone. Charles Fisher, an Australian backpacker, witnessed one of the group’s gigs, and recommended that they tour Australia. Syrius toured Australia from 1970 to 1971, with a performance at South Australia’s Myponga Festival in January 1971. They recorded Syrius in Melbourne with Fisher producing. It was released in Australia (on Spin) and Hungary. They also released a single in Australia, “I’ve Been This Down Before”. Ian McFarlane, an Australian rock music historian, says Syrius was “Hungary’s top rock attraction” and had previously released several jazz fusion albums before moving to Australia. After the tour, Syrius returned to Hungary in October 1971.

Jackie Orszaczky was back in Australia by August 1973. He joined Bakery, an experimental rock band that had already produced two albums. He remained with Bakery until February 1975. He soon used a studio band consisting of Graham Morgan on drums, Peter Jones on electric piano and John Robinson (ex-Blackfeather) to record his first solo album, Beramiada. He joined Marcia Hines’ backing group on bass guitar in May 1975 and became her musical director, and arranger. Beramiada, a progressive jazz-fusion artist in the vein Weather Report, George Duke, and Caravanserai era Santana, was released on the Real label in December 1975. He released “Let’s Get and Make It” in December 1976. For four years, he worked with Hines and was featured on her debut album Marcia Shines (October 1975), and the related singles “Fire and Rain”, “From The Inside” and “I Just don’t know what to do with myself”. Orszackzy designed the stage arrangements for Hines’ Australian tour. This was recorded for her double-live album Marcia Hines Live Across Australia. It was released in March 1978.

Orszaczky founded Jump Back Jack in 1987 with Linda Bacon as vocalist and trumpet player; Mike Bukowsky as trumpeter; Mark Simmons as saxophone and trombone player; James Greening and James Greening both on trombone and trombones; Phillip Campbell (ex-Electric Pandas); Phil Colson and Hamish Stewart (Ayers Rock). They were known for their West Coast rock and funk, which they compared to Cold Blood, Tower of Power, and Blood, Sweat & Tears. Jump Back Jack (1987), and Double Take (1988) were released by the group. He founded The Godmothers in 1990 with Chris Abrahams on keyboards, and Greg Sheehan as drums. The group performed covers of R&B, funk and Ray Charles songs. Orszaczky’s second solo album, Family Lore was released in August 1994. He was backed by The Grandmasters who had a line-up that included Abrahams on guitar (Whirlywirld and Max Q), Cathy Harley on keyboard, Tina Harrod singing, Geoff Lundgren on synthesiser, and Arne Hanna on guitar. Orszaczky and Harrod, both born 1964 in New Zealand, were married within six months.

He was a well-known musician who had a long career. He continued his tour in Hungary and still commands crowds of 3,000-30,000 at his annual Budapest concerts. Orszaczky performed in various groups, including The Grandmasters with Harrod, Jump Back Jack, the Godmothers, The Orszaczky Budget Orchestra, and the Jackie Orszaczky Orchestra. He orchestrated arrangements for The Whitlams and You Are I, Hoodoo Gurus and Tim Finn. He collaborated also with Tony Buck and Chris Abrahams. Orszaczky received the Knight’s Cross of Order of Merit from the Hungarian government in 2006.

Orszaczky was diagnosed in 2006 with leukaemia. His last gig was at the Macquarie Hotel, Surry Hills, 24 January 2008. Greening, a long-term support musician, called the evening “unbelievable.” “Since his illness, he continued singing better and better each time I played with. It was inspirational and truly empowering. Jackie Orszaczky, 59, died in Royal Prince Alfred Hospital on February 3, 2008 from complications arising from his lymphoma treatment.

Jackie Orszaczky married twice. He was first married to Leah Bangma (until 1983), and they had a daughter Anna (born February 1980). His second marriage to Tina Harrod was also a success, and they had a daughter Mia (April 2000). Harrod and Orszaczky also worked together musically as singer-songwriters. He co-produced her solo album Shacked up In Paradise (February 2004).

Orszaczky created his piccolo bass in the early 1990s. It was a high-tuned, low-pitched bass guitar with light gauge strings that could be tuned at either D, G C, F, or A D, G.