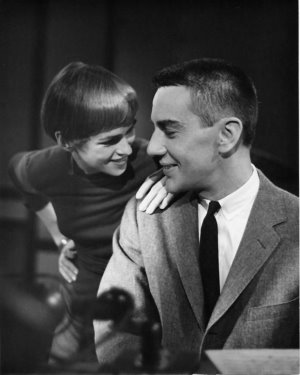 Singer Jackie Cain (born May 22, 1928, Milwaukee, WI) and singer/pianist Roy Kral (born October 10, 1921, Chicago, IL) first joined forces in 1946, and in 1996 they celebrated their 50th anniversary as a vocal duo. Jackie & Roy were with Charlie Ventura’s band during 1948-1949 (which gave them a great deal of recognition); Lou Stein’s “East of Suez” was an unusual feature for their voices. Shortly after leaving Ventura in June 1949, they were married and worked together on a regular basis ever since. Jackie & Roy had their own television show in Chicago in the early ’50s, worked in Las Vegas during 1957-1960, settled in New York in 1963, and appeared on some television commercials. They recorded many spirited jazz performances for a variety of labels through the decades, and performed into the 2000s until Kral’s death in August 2002. Roy was the brother of singer Irene Kral. from allmusic