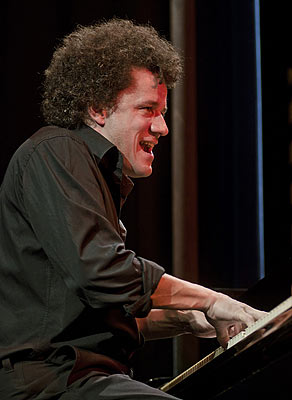 According to Telerama magazine, Jacky Terrasson is the “piano player for happiness”, the most well-traveled jazz pianist. He is a thrilling musician and one of the few who can take their audience straight to euphoria. He was born in Berlin to an American mother and French father. He grew up in Paris. When he was five years old, he began to play the piano. After studying classical piano at school, he went on to study jazz with Jeff Gardner. His introduction to jazz was made possible by his encounter with Francis Paudras, whose film “Round Midnight” tells the touching story of a long-lasting friendship with Bud Powell. Jacky went on to the Berklee College of Music in the United States. After winning the Thelonious Monk Award in 1993, Jacky began touring with Betty Carter. He moved to New York and is still a resident there today. One year after his victory in Thelonious Monk’s competition, Jacky was named by the New York Times Magazine as one of the “30 under 30”, which is to say that he is one of the 30 artists most likely change American culture over the next 30 years. The prestigious Blue Note label signed him. Blue Note signed him to three trio recordings (Jacky Terrasson and Reach), Then he devoted himself to several collaborations, including “Rendezvous” with Cassandra Wilson and “What it Is” with Michael Brecker. He recorded “A Paris”, a personal interpretation of French songs, for Blue Note in 2001. Franco-American national never ceases to amaze us. He has been a great collaborator with many greats like Dianne Reeves and Jimmy Scott. This intuition, this instinct and this openness lead him to discover the many great talents in his various groups (talents like Jamire Williams, Eric Harland, Jamire Williams, Jamire Williams, Justin Faulkner). Jacky Terrasson signed in February 2012 with Universal Jazz France. His debut album, “Gouache”, will be released in Fall 2012. It is a joyful celebration of his 20-year history. He is joined by some of the most talented musicians in New York, including Stephane Belmondo and Minino Garay. He regularly performs in solo or in a trio at the great jazz festivals (Montreal and San Francisco, Montreux and North Sea Jazz, Marciac), and in the most prestigious Piano festivals, La Roque d’Antheron and Klavier Ruhr Festival. He plays in Asia, South Korea, China and Japan as well as Europe and the United States. Jacky Terrasson’s playing could be compared to Bud Powell because of his controlled speed on the piano keys. Ahmad Jamal would be a good comparison for his sense and phrasing. He also has a great knowledge of French composers like Debussy, Faure, Ravel. Jacky Terrasson creates his own style through his fingers. He mixes and melts the sounds and inventions of great pianists yesterday and today. His playing is subtle and fresh, played with ease and facility. From jackyterrasson.com