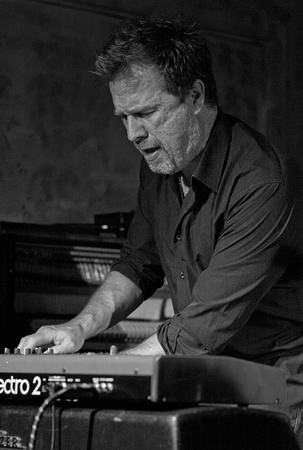 Jacob Christoffersen, a Danish jazz composer and pianist was born March 31, 1967 in Copenhagen. At the age of nine, he attended music school and started his professional career at age 13. He was a member of his own band, feat. Kristian Jorgensen was the violinist. He performed in small jazz clubs as well as at festivals that moved on to radio and television. He was a young jazz musician who attracted a lot attention because of his mature playing style. At the age of 17, he won his first jazz award, ‘Sorens penge’ for his exceptional playing and musicianship. Jacob came to Copenhagen to join the vibrant music scene. He played jazz but he also moved towards pop, gospel and funk. He was a member of the Danish band Ridin’ Thumb and also co-founded several other bands, including one with Christina Nielsen (now known as Christina Dahl). He recorded and toured with many musicians over the next years, including Fred Wesley and James Moody. He was part of Hans Ulrik’s band and the Lars Moller Group, a saxophonist. Both of their groups were awarded Danish Music Awards (Grammys) and toured extensively throughout the world (China (Australia, Hong Kong), New Zealand, Numea), Russia, Scandinavian, Europe, and USA). He was part of Majbritte Ulrikkeholm’s various bands, which recorded multiple albums. He was a pianist, keyboardist and bandleader as well as a co-composer. This made him an important player in the Danish Pop/Gospel scene. Jacob started his own jazz band in 1999 with original material. He also developed his own musical style and ideas. He recorded four albums and toured extensively across Europe. He was appointed Associate Professor at The Rhythmic Conservatory, Copenhagen, from 1999 to 2014. He also worked with Chris Minh Doky, an internationally acclaimed bassplayer. They recorded and toured throughout Europe and Asia. He joined Shu-bi-dua in 2001, where he played various instruments, including piano, keys, guitar and accordion. He played 600 concerts with the band over the next ten years, many of them in front of large audiences. Shu-bi-dua has sold more than 7 million records, and that’s just in Denmark. He has been the pianist for the internationally-acclaimed jazz singer Sinne Eig since 2008. Since 2008, he has been touring and recording with her. He has played over 300 concerts around the world and received two Danish Music Awards (Grammys). Jacob was associated with the legendary Copenhagen jazz club Jazzhus Montmartre from 2010 to today. He is a leader and participant in various musical groups that feature many internationally acclaimed jazz musicians, including: Jeff Watts, Terry Linn Carrington and Till Bronner, Rodney Green and Warren Wolf. He was awarded the prestigious ‘The Special Ben Webster Honorary Prize in 2013 for his outstanding contributions to the Danish jazz scene. Jacob’s most recent album, “We Want You” (Stunt Records), was well-received both nationally and internationally. It won the title of “Album Of The Year 2017” in Jazz Special. from www.jacobchristoffersen.com