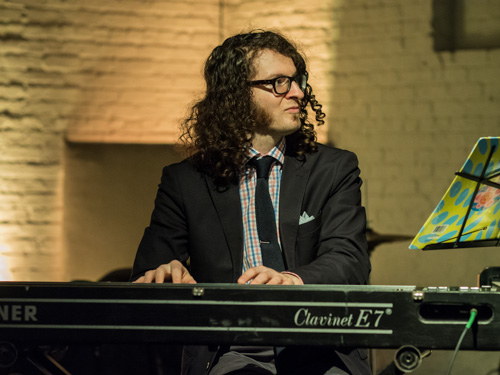 Jacob Sacks is a highly creative pianist on the NYC jazz scene. His distinctive voice can be heard in many settings, including the jazz tradition of the Mingus Big Band Orchestra and the open approach of Paul Motian Septet as well as the vamp-based fusion of David Binney’s Balance. Jacob is originally from Michigan and was a 1995 Presidential Scholar in The Arts. He then moved to New York City to continue his studies with Garry Dial, Manhattan School Of Music. Jacob was a finalist at the 1999 Thelonious Monk International Jazz Piano Competition. Jacob has been part of numerous ensembles over the past 12 years. He has also recorded many albums and toured Canada, the United States and Europe several times. Clark Terry, Terumasa hino, Charles Gayle and Eddie Henderson were among his many musical collaborators. His current projects include a long-standing duo with Yoon Sun Choi (with whom Jacob recently released an album of Joe Raposo’s music); the quartet “Two Miles A Day”, co-led by Eivind Opsvik and featuring violist Mat Maneri as well as drummer Paul Motian; and a trio that includes Dan Weiss, bassist Thomas Morgan, and drummer Dan Weiss. Jacob currently lives in Brooklyn, where he works on several recording projects as well as teaching fifteen students in his private practice. From www.jacobsacks.com