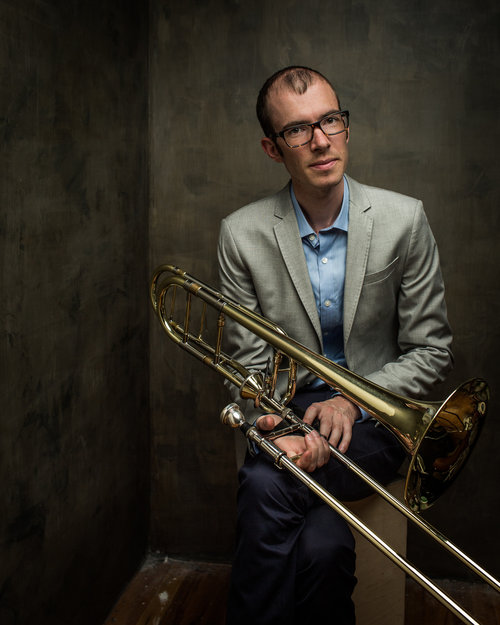 James Hall is a versatile trombonist/composer who reimagines professional musicianship for the next generation. Hall’s second album, Lattice, (Outside in 2018), was described by JazzLife Magazine as a “masterpiece of chamber music”. It is built around Hall’s fluent trombone playing and Jamie Baum’s virtuosic flute playing. This harmonious combination allows for a variety of contrasts and is a flexible and expressive study of contrasts. Kirk Silsbee was a fan of the work’s “graceful musical combinations and linear development” (Downbeat Magazine), while Bob Morello described the work as “a delicious treat” and “a potpourri full of great tunes”(Boston Post-Gazette). Hall previously blurred the lines between classical chamber music, free jazz, and contemporary poetry with Soon We Will not Be Here (2015). He created original settings for poetry by Tina Chang and Malena Morling and Emily Ruth Hazel for quartet. This project premiered at Fridman Gallery in Manhattan. It was well received by an underground audience in France, Belgium, France and the USA on Taran’s Free Jazz Hour. Hall can often be found recording and touring internationally with Postmodern Jukebox, the viral sensation that has over 80 million YouTube views. He also recorded videos with Williamsburg Salsa Orchestra whose salsa dura indie rock interpretations were featured in Rolling Stone Magazine’s Latin Hot List. Hall said that he believes in fun concerts and the non-musical elements of music. I believe in humor. I believe in humor, even though the music isn’t accessible.” James, a composer and bandleader was named a finalist for the ASCAP Morton Gould Young Composer Competition. He also won three ASCAPlus Awards and was a featured performer/composer during the Chelsea Music Festival. James’ trombone playing was awarded third place, runner up, and honorable mention at the Antti Rissanen J.J. Johnson and Carl Fontana International jazz Trombone Competitions. James has degrees from the Aaron Copland School of Music and Lawrence Conservatory of Music, Wisconsin. His teachers include Luis Bonilla and Hal Crook, Michael Dease (Wisconsin), Nick Keelan, Ed Neumeister and Fred Sturm. from www.jameshallmusic.com