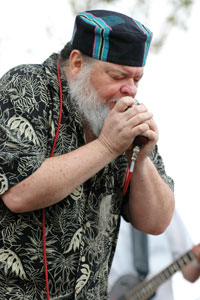 JAMES HARMAN was a native of Anniston, Alabama. He grew up listening to the soul and black music on the radio and jukeboxes. He was a member of the church choir from age 8 until he moved to Panama City, Florida with his family. There he met other blues lovers. Young James donned a fake moustache and slipped into a black nightclub to catch Little Junior Parker’s show. The blues took over and he soon became a regular. He was nicknamed “That boy who sings as a man” by his patrons. He began playing in juke joints throughout the South while still in his teens. His performances were legendary. He was “tapped” and signed by talent scouts. In 1964, he moved to Atlanta, Georgia to start his recording career. A series of nine 45 RPM singles were released by him during the late to mid 60’s on obscure southern label labels. He attempted several restarts at new bases, including Chicago in 65, New York 66, Miami ’68, and New Orleans ’69. Harman met fellow record collectors Henry Vestine and Bob Hite from Canned Heat while he was in Miami. They convinced him to move to California and promised to get him re-started. Harman moved to SoCal in 1970. Canned Heat insistently booked Harman’s Icehouse Blues Band to open their big shows. Icehouse Blues Band was established at venues like The Golden Bear, The Ash Grove and The Troubadour, all of which booked blues musicians. James Harman quickly became a sought-after performer who supported every blues artist on tour without a band. For artists who had their own bands, he opened hundreds of shows. Icehouse Blues Band was an actual working blues band. James Harman Band was his new name in 1978. Some of his alumni include Gene Taylor, Bill Bateman and Phil Alvin. Stephen Taylor Hodges, Stephen Taylor Hodges, Michael “Hollywood Fats”, Mann, Stephen Taylor Hodges, and Jeff “Big Dad.” Turmes. All of these musicians served long periods in the Harman Band. James is often credited as the band leader that gave rise to many of today’s bluesmen. Harman stopped touring the ground in 2000 and now takes only blues festivals around the globe. Nathan James was James Harman’s regular guitarist in his band since 1997, when he was just 19 years old. He turned 37 in 2015. Harman still loves Nathan James! Nathan is also James’ recording engineer and coproducer on their own projects as well as those they produce for other artists. Bamboo Porch Revue is James Harman’s side project. It features Nathan James, guitarist, playing low-down, rollicking juke-joint Blues over James Michael Tempo’s Afro-Cuban drumming, Troy Sandow’s sparse, pulsating bass, and Marty Dodson’s skilled drumming. James Harman’s long career, which began in the early 60s, has given him a huge song collection and 20 of his original songs have been used in films and television. He has been nominated to 20 W. C. Handy (Blues Foundation), awards. Inducted into the Alabama Music Hall of Fame. He is the harmonica player of preference on many ZZ Top albums and performs live with them on numerous international TV shows. James Harman has 33 albums on various labels. He currently tours in 29 countries every year, including the spring, summer, and fall. Harman was nominated to a Grammy Award and won two Blues Music Awards in 2014 for his contribution to “Remembering Little Walter”, a Blind Pig album. He is an exceptional song writer, producer and musician. In 2015, Electro-Fi’s “BONETIME”, was nominated in five BMA Awards: ALBUM of the Year, ALBUM OF THE YEAR and TRADITIONAL ALBUM O OF THE YEAR. Also, HARMONICA PLAYER, SONG OF THOUGHT OF THE MONTH, AND TRADITIONAL BLUES MAN ARTIST OF THOUGHT OF THE MONTH. From www.jamesharman.com