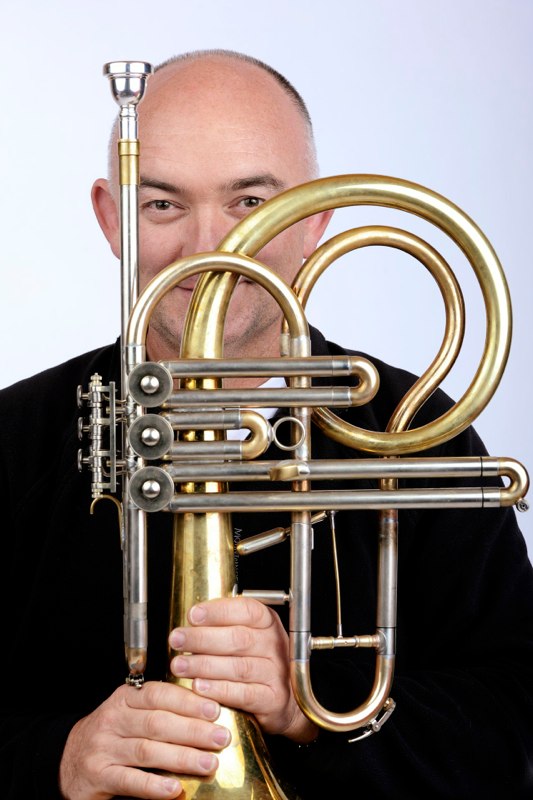 James Morrison AM, an Australian jazz musician, was born 11 November 1962 in Boorowa (New South Wales). He is most well-known for his trumpet playing. He is a multi-instrumentalist, having performed on the Clarinet, Soprano Saxophone, Alto Saxophone, Tenor Saxophone, Baritone Saxophone, Flugelhorn, Bass Trumpet, Trombone, Euphonium, Tuba, Double Bass and Piano. He is also an accomplished composer who has written jazz charts for various ensembles and proficiency levels. He performed and composed the opening music at the Sydney 2000 Olympic Games. He joined Warren Brown and Steve Pizzati as Top Gear Australia’s presenter in 2009. James was named Artistic Director of Queensland Music Festival in 2012 for the 2013 and 2015. Morrison’s family is musical. His older brother John Morrison, a jazz drummer, is highly respected. They formed the Morrison Brothers Big Bad Band, a big band of 13 musicians in 1983. John and James also collaborated on numerous other projects and recordings. His father was a minister in the church. His sister is a trumpeter, and his mother plays piano and alto sax. Morrison has always valued the discovery and nurturing of young musicians. At the age of 16, he met Emma Pask, his regular singer, and has gone on to be an internationally-respected jazz singer. Morrison supports yearly scholarships for young musicians and is active in several youth bands. He is a major supporter of young Australian musicians through his association with Generations In Jazz. Morrison has performed with Dizzy Gilespie (the first Australian to do this), as part of the Don Burrows band, Ray Charles, and B. B. B. Wynton Marsalis and Ray Brown were also among his collaborators. He was the soloist for the Black Dyke Band’s 150th anniversary concert in 2005. In 2007, he performed as a guest soloist at two concerts in London and Manchester. He founded On The Edge in 2003 with Simon Stockhausen, a German keyboarder/composer. The CD was released by Morrison Records. Morrison also has a long association to Composer and Pianist Lalo Schifrin, of Mission Impossible fame. He has recorded several CDs on Schifrin’s “Jazz Meets The Symphony” series. These recordings include those with the Czech National Symphony and the London Symphony. James Morrison is not only an instrument player, but also participated in the creation of them. He formed an association with the Austrian brass manufacturer Schagerl in 2010 and they produced several “signature” models. There are two series: the custom-made, hand-made “Meister”, and the professional intermediate “Academica”. Both series have trombones and trumpets, while the Meister series includes a flugelhorn and a bass trumpet. His most popular design is the “The Raven” trumpet. This horn uses rotary valves and a longer lead pipe that is normally associated with a piston-style trumpet. He writes in his blog, “The design came from my desire to have a Rotary Valve Instrument due to the different range of articulation that you get with them than piston valves.” The rotary sounds better and has a smaller “dead zone” between pushing the valve and hearing the next note. This is especially noticeable when you play fast in the upper register, which I enjoy doing. The Morrison Digital Trumpet was created in an earlier instrument creation project by Steve Marshall, a robotics expert and designer. It is a MIDI wind control that acts and looks like a futuristic trumpet. It allows a trumpeter, much like a pianist, to play electronic sounds. Morrison also expanded his interest in musical technology to include vocal performance. He wrote the track “(Tired of Being) The Other Woman” for his collaboration album The Other Woman, which also features Deni Hines. Morrison revealed his latest music technology when he performed the track in Sydney. It’s a Roland keyboard (VP770), with a microphone attached. The microphone “sings” whatever Morrison says into it, creating the sound of a choir. Morrison also built and designed his own recording studio in Sydney. It’s in constant use and has recorded a wide range of Australian jazz musicians, including Jake Barden and Dan Clohesy. It boasts the latest equipment and five recording rooms. At the Davis Cup Final in Australia 2003, Morrison performed the wrong Spanish National Anthem. He instead of performing the La Marcha Real anthem, Morrison performed the Himno de Riego. This was a new anthem that has not been heard since the Second Republic [2] which caused the angry Spanish Secretary of State of Sport to run away in anguish. Morrison revealed that he had misunderstood the tune after being given incorrect sheet music. A CD of the correct anthem was quickly discovered by an official, placating the Spanish and allowing them to continue their match. Morrison performed a duet in a duet with Craig McLachlan, an Australian soap actor, on the 500th anniversary episode of Neighbours. This was 1989. McLachlan was the guitarist and Morrison played the trumpet. Wikipedia