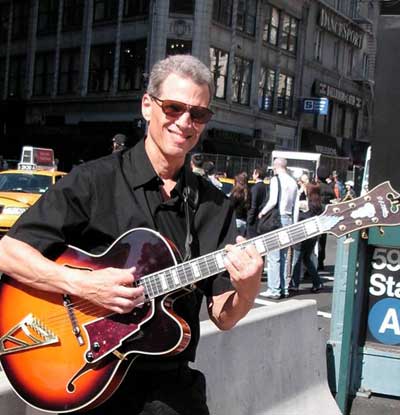 James Silberstein, a guitarist and a well-known name in jazz, is an accomplished, hard-swinging improviser who’s been part of the New York City jazz scene since late 1970s. Silberstein can play electric jazz-funk, and has supported many non-jazz artists over the years (including the Drifters). Straight-ahead jazz is his main focus. Those who know Silberstein tend not to see him as a post-bop/hard bop player, but he does appreciate jazz’ pre-fusion guitarists. His biggest influences are post-bop, bebop and hard bop guitarists from the ’40s to ’50s and ’60s. These include Barney Kessel, Tal Farlow, Joe Pass, Wes Montgomery and Pat Martino as well as George Benson (mainly the straight-ahead Benson in the ’60s rather than the more commercial R.