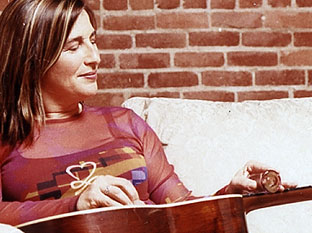 Jana Herzen, a singer-songwriter who has folk, world and rock influences, founded Motema Music in Harlem. The label is focused on world and virtuosic music. Before founding Motema Music in 2003, Jana Herzen was a musician. Her CD, Soup’s On Fire was her first CD. She also worked as an art agent for Winston Smith. Herzen helped publish Artcrime, Smith’s second volume of collected works under the Last Gasp imprint. Herzen is the daughter of Professors Leonard Herzenberg and Leonore Herzenberg. She was born on Stanford University’s campus and attended New York University from 1980-1982, where she received a drama undergraduate degree. She met Robert LuPone and Bernard Telsey while at NYU. She was a founding member, along with Lupone, Telsey and five other NYU graduates. For 10 years, she served as an actor, director, script doctor, lighting designer and actor for the award-winning theatre production company Manhattan Class Company. She left Manhattan in 1991 to go to Japan, Bali and Australia to work on songs for her debut album. It was recorded in San Francisco, Paris, and London from 1994 to 1997 by Shaka Ra Mutela (a Congolese ex-bassist and musical director for Papa Wemba, an international music star from Congo).