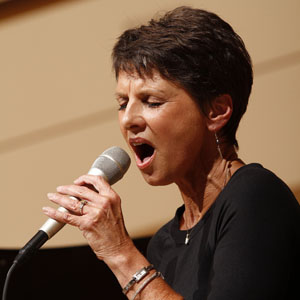 b. 29 September 1949, Chicago, Illinois, USA. Borla started singing when she was 12 years old. She then earned a BA in music at Barat College in Lake Forest, Illinois. She studied at Northwestern University as well as the University of Illinois at Champaign–Urbana. During this time, she was a member of Ineluctable Modality (a 12-voice chamber group), whose repertoire was based on contemporary composers like Morgan Powell, Mauricio Kagel and Iannis Xenakis. She was also responsible for the establishment of a Saskatchewan School of the Arts vocal jazz program in 1986. Borla created the Janice Borla Vocal Jazz Camp three years later. Its stated purpose was to provide a nurturing and educational environment for aspiring jazz singers through a week-long intensive course of skill development and study, led by professional jazz musicians. The camp is widely admired for its achievements and intentions. You can see the quality of the teaching by looking at the names of those who have taught over the years. Borla has performed with many notable jazz musicians, including Johnny Frigo and Gary Bartz. She also led her own band. While performing a lot, Borla was Director of Vocal Jazz at North Central College in Naperville. She was also a sought-after clinician at numerous educational institutions in North America and Europe. Borla is a strikingly talented singer. Her searching intelligence not only results in many beautiful performances but also greatly enhances the ability to teach and bring out the best of her students, helping to preserve the important traditions in jazz singing. Allmusic