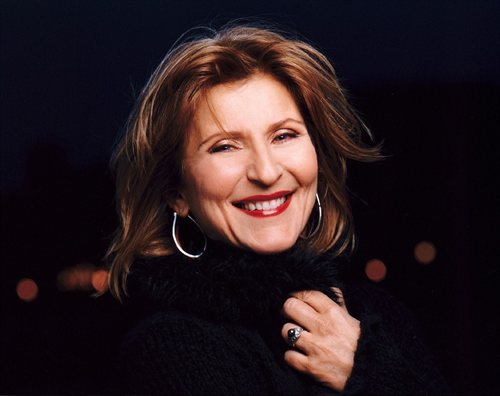 Janis Siegel, a nine-time Grammy Winner and seventeen-time Grammy nominee, has been a constant presence in The Manhattan Transfer’s varied musical repertoire for the past three decades. Siegel’s career as a member has been a long-standing musical institution. Siegel also has a solo career, which has produced more than half a dozen albums and many collaborative projects. Siegel has received consistently high critical praise and has amassed an international fan base. Siegel was born July 23, 1952 in Brooklyn. She began learning about the business of music at an early age. She was already singing in an all-girls pop group called The Young Generation at the age of 12. She and her bandmates had already released two singles, “The Hideaway” on Red Bird Records and “It’s not Gonna Take Too Much” on Kapp Records by the time they graduated high school. Siegel recalls, “At that point, I was only listening to pop music.” “When Motown was popular, I fell in love with it as well as Aretha Franklin. Of course, I was obsessed with the Beatles. Barbra Streisand was also a favorite of mine. Living in Brooklyn, I was able to see many Broadway shows. She also remembers John Coltrane, her jazz idol, as a high school and college student. After graduating high school, the trio switched from pop to acoustic and renamed themselves Laurel Canyon. After a few years of nursing studies, Siegel decided to devote her entire energy to Laurel Canyon. It was a chance meeting that led her to The Manhattan Transfer. Tim Hauser was an aspiring musician and was driving a taxi that night. He happened to stop by Laurel Canyon’s conga machine one night. Hauser was invited to a party by the percussionist, where he met Siegel. Siegel asked Hauser to sing some demos that he had been creating. Siegel was astonished to discover some of Hauser’s early swing music. Siegel had previously been absorbed in pop and folk music. Hauser invited Siegel into a four-part vocal ensemble he was trying to rebuild. In the late 1960s, a different lineup had been formed with a slightly different sound and style. It was the beginning of The Manhattan Transfer’s rebirth when Siegel joined Hauser, Laurel Masse and then Alan Paul in 1972. 1975’s self-titled debut album marked the beginning of a quarter-century-plus-long success story for the group. Janis’ distinctive voice became a trademark of the group over the years. Some of the biggest Transfer hits included “Operator”, Chanson D’Amour”, Twilight Zone”, Janis’ voice, “Ray’s Rockhouse”, Ray’s Rockhouse”, Sassy”, Spicy”, Mystery, and “Boy From New York City”. She was also a skilled vocal arranger, having written five charts for the group’s Grammy-winning masterpiece, Vocalese. Seven charts were for the group’s Grammy-winning album Brasil. In 1980, she won a Grammy for her arrangement of “Birdland”. She and her Manhattan Transfer colleagues were awarded honorary doctorates by the Berklee School of Music in 1993. In 1999, they were among the first inductees into The Vocal Group Hall of Fame. Since nearly two decades, Siegel has had a dual career. She has been performing on stage and in studio with The Manhattan Transfer since 1982. In 1982, Experiment In White was released by Atlantic Records. Joel Dorn produced it. In 1987, her solo album, At Home, won her a Grammy nomination for Best Female Jazz Vocal. Fred Hersch, a jazz pianist, collaborated with her on Short Stories 1989, which JazzTimes listed as “among the most graceful and deeply heartbreaking efforts of this era” due to her rich, emotive voice. The New York Music Awards also named Siegel the Best Female Jazz Singer that year. Siegel was not one to leave behind a formula that had been a success. She reunited Hersch for Slow Hot Wind (1995) and The Tender Trap (1999). The Trap session roster featured high-profile players such as Hank Crawford and Russell Malone. Diversity has been a hallmark in Siegel’s life. Her favorite collaborations are with Ilhan Mimaroglu, a Turkish modern classical composer, and the Beaux Arts String Quartet. This project is a musical and spoken-word project called Like There’s Tomorrow.