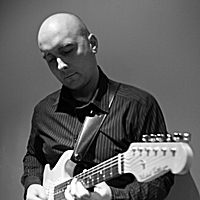 Jason Sadites, a Canadian guitarist, began playing guitar when he was ten years old. Jason Sadites, a Canadian-born guitarist, began playing guitar at the age of ten. He studied music and recorded and produced music for many years. Jason then started writing, producing, and recording his own music as well as the music of local bands. Jason used his skills as a guitarist and writer, as well as producer, engineer, to enter the studio in 2004 to start work on his debut CD, ‘ORBIT’. It was released in 2005. “ORBIT” received rave reviews from many sources. They complimented Jason’s guitar playing and his songwriting skills. Jason’s second CD, ‘WEVE’ was released in 2009. Jason is joined by many top musicians on the CD. Kenny Aronoff and Marco Minnemann are among the many world-renowned drummers. The rhythm section is completed by Martin Motnik, Matt Bissonette, and Tony Levin. Click here to purchase the exciting new CD from various online retailers. It would not be easy to follow up on “WEVE”. Jason, always open to new challenges, embarked upon his most exciting project to date: his interpretation of Marco Minnemann’s incredible Normalizer 2 project. This CD became “behind laughter”. “Laughter” is one release in Marco Minnemann’s Normalizer 2 series, which also includes CDs by Trey Gunn and Mike Keneally, John Czjakowski and Phi Yaan Zek. Jason’s fourth studio album was released in 2012 and featured performances from some of the best musicians around. “Broken” featured amazing performances from the likes Tony Levin and Marco Minnemann, Alex Machacek, Bryan Beller, Adam Nitti and Alex Machacek. “Broken” could be considered a continuation to “WEVE”, solid instrumental rock/fusion tracks that focus on great writing, odd time grooves, catchy melodies, and some ‘tasty guitar playing. Jason just released his fifth studio album. Jason decided to record his fifth studio album in a trio with Marco Minnemann, Ric Fierabracci and Ric Minnemann as drums. Jason’s best writing and playing can be found on this album. It features many polyrhythmic musical ideas interwoven into solid rock-based fusion tracks. Jason’s incredible guitar playing and Ric and Marco’s amazing performances make this a CD that music and fusion fans will not want to miss. From www.sadites.com