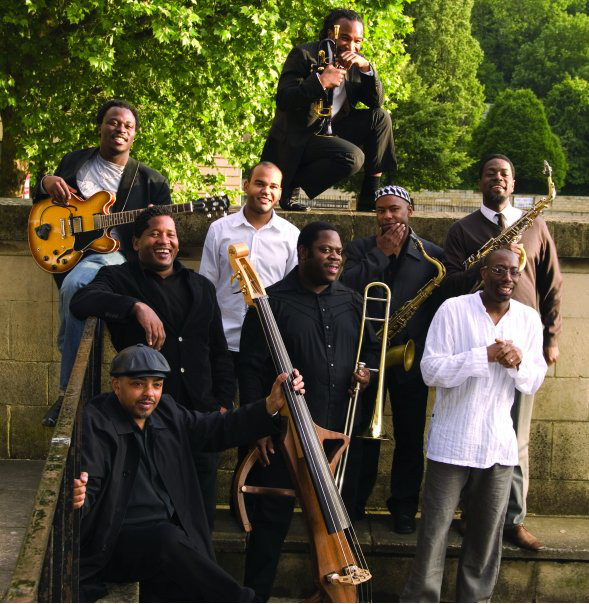 In 1991, inspired by the rhythms of traditional Jamaican music and the largely improvisational nature of jazz, original Jazz Warrior, and veteran jazz double bassist, Gary Crosby turned a musical concept into a joyful reality. Gary’s concept was to create a quintessential fusion of mento, ska, reggae and jazz, playing classic and modern jazz standards alongside Jamaican folksongs. To achieve this, he gathered together a group of musicians drawn from the jazz and reggae circuits, each of whom is a distinguished musician in his own right. The result was Jazz Jamaica … a wonderful 9-piece dance band. Over the next 8 years, Gary successfully developed the Jazz Jamiaca concept by introducing a stream of talented young jazz musicians, so increasing the size of the pool of “Jazz Jamaicans”, and enabling him to extend the boundaries of the music played. Collectively, Gary and his musicians represent the finest exponents of this unique musical fusion known as skazz, a fusion loved and appreciated by everyone, of all ages and colours around the globe. After recording four great albums with Jazz Jamaica, Gary was ready to move to the next stage. In March 1999 he took his concept further by expanding the core lineup of Jazz Jamaica to formal big band status adding a raft of guest soloists. The result is the Jazz Jamaica All Stars, a 20-piece band featuring three generations of musicians of all colours between the ages of 24 and 72, drawn from diverse sectors of the jazz community. The line up features vocals, five saxophones, four trumpets, and four trombones with a rhythm section of double bass, piano, drums, guitar and percussion. Featured artists include Denys Baptiste, Andy Sheppard, Soweto Kinch, Juliet Roberts, Orphy Robinson, Guy Barker, Kevin Robinson, Ashley Slater, Annie Whitehead, Alex Wilson … The music has its genesis in the London jazz scene of the 1940s and 1950s which embraced the music of the first generation of Caribbean immigrants, and there is a creative line that runs through free jazz pioneer Joe Harriott in the 1950s, via guitarist Ernest Ranglin’s work in the 1960s, through the Jazz Warriors and saxophonist Courtney Pine in the 1980s, to today’s generation. Jazz Jamaica All Stars is the first formally structured big band to play this particular blend of jazz. They reflect the Caribbean music tradition and demonstrate in vibrant and exuberant form its massive contribution to a living, constantly changing jazz tradition. And what’s great is that you don’t need to know a lot about jazz to enjoy an evening with this all-star band. Anyone with a love of ska, big brass sections, Latin sounds, or classics like Millie’s My Boy Lollipop, Prince Buster’s Al Capone, Wayne Shorter’s Footprints and Herbie Hancock’s Dolphin Dance will love the Jazz Jamaica All Stars. In fact, whilst dancing isn’t guaranteed, the music is SO infectious, we have yet to see an audience fail to get to its feet! Jazz Jamaica All Stars début album, Massive (DUNECD06)was released on 22 October 2001 on Dune to huge critical acclaim. The band toured extensively including some key overseas dates, including Banlieues Bleues (Paris, France), Jazz Sous Les Pommiers (Coutances, France), La Mar de Musicas (Cartagena, Spain). In July 2002, Gary Crosby’s efforts and achievements were recognised when, at a star-studded gala held at London’s Queen Elizabeth Hall on the South Bank hosted by sax supremo Courtney Pine OBE and TV presenter Jools Holland, Gary was presented with the BBC Radio Jazz Award for Best Band 2002. A hugely popular decision, the award acknowledged the difficulties faced in maintaining an all star big band, and the immense effort required on the part of the bandleader. Gary was deeply moved to receive his award from Sue Mingus, widow of the legendary bassist who has been an inspiration and hero to Gary throughout his career. Later in the awards ceremony, Jazz Jamaica All Stars performed live with the great South African trumpeter, Hugh Masekela playing his original piece, Mamoshaba. Gary Crosby was presented with yet another award at the after-party of the BBC Radio Jazz Awards, this time for Consistent Contribution to Music In Jamaica. The award, which recognises the efforts and achievements of those promoting and developing jazz in Jamaica and confirms Gary’s place in the Jamaica Jazz Hall of Fame, was presented by vocalist Myrna Hague and trumpeter Sonny Bradshaw OD, co-directors of the Ocho Rios Jazz Festival. Just a few of those who have had this honour bestowed upon them are Joe Harriott, Ernest Ranglin, Dizzie Reece, Andy Hamilton, Elaine del Mar… This is Crosby’s greatest success, to be able to present challenging and original solos in some well-crafted and artfully constructed charts… but to do so with such flair that his music appeals to dancers and serious listeners alike. … must now rank as Britain’s finest big band. Alyn Shipton – The Times from www.jazzcds.co.uk