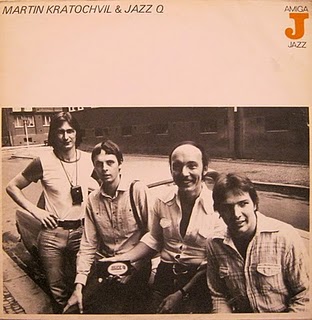 Jazz Q is a jazz/art-rock band that Martin Kratochvil has been leading since 1964. There have been many personnel changes over the years. Former members include Jiri Stivin, jazz flautist, and Lubos Andrst, guitarists. The current line-up included Kratochvil as a Moog and Fender Rhodes pianist, along with a vocalist. From http://prague.tv Martin Kratochvil was a well-known figure in Eastern Europe during the 1970’s when he introduced jazz-rock and live electronic performances to the region. His legendary band Jazz Q recorded 12 albums between 1970 and 1984 and won prizes at many international festivals including San Sebastian and Zurich. Kratochvil had previously been able to complete a Ph.D. at Prague’s Charles University in Philosophy, then travel for a year in England to pursue his interests in jazz, mountain climbing, and competitive skiing. He was the first Czech musician to be allowed to spend a full year at Boston’s Berklee College of Music in 1976. There he studied with Mike Gibbs and Gary Burton. After his 1977 return from the U.S., Kratochvil worked with Jazz Q and founded Studio Budikov. This was the first privately owned recording studio in Communist Czechoslovakia. This entrepreneurial spirit was cultivated in the formation of the Bonton Music Cooperative, still under communist rule. It went on to become, following the Velvet Revolution in 1989, the largest entertainment conglomerate of the former East Bloc. Martin, as Chairman of Bonton is well-known outside of Czech Republic as the role model for the new Czech entrepreneur. He is still passionate about climbing and continues to travel twice per year to the Himalayas to do more remote treks. In the last few years, he has added to his portfolio of careers with several films about the Himalayas. But, he is most at ease behind the keyboard. His style is reminiscent of Keith Jarrett or Thelonius Monk, but he also uses a strong rhythmic attack and rhythmic drive to create a unique sound that is easy to play with any object. from http://www.reverbnation.com