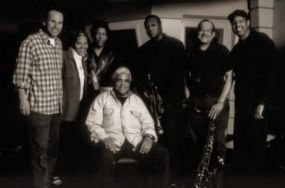 The new Jazz Soul Seven is a group of all-star musicians, founded by Robert Hurst. It includes Terri Lynne Carrington as drummer, Russell Ferrante as pianist, Henry Gibson as percussionist, Wallace Roney as trumpeter, and Ernie Watts, saxophonist. from http://www.notreble.com Phil Upchurch handpicked four Los Angeles-based players and two special imports, all well-known in jazz circles but with the earthy sensibilities to grasp and interpret the gospel and funk of where Curtis was coming from. As a guitarist, Phil has recorded and performed with many artists, including Whitney Houston, George Benson and Bill Cosby. Ernie Watts, a wind and reed player who is universally respected and versatile, is Ernie Watts. His ethereal tone has been the voice of choice for many pop and R artists.