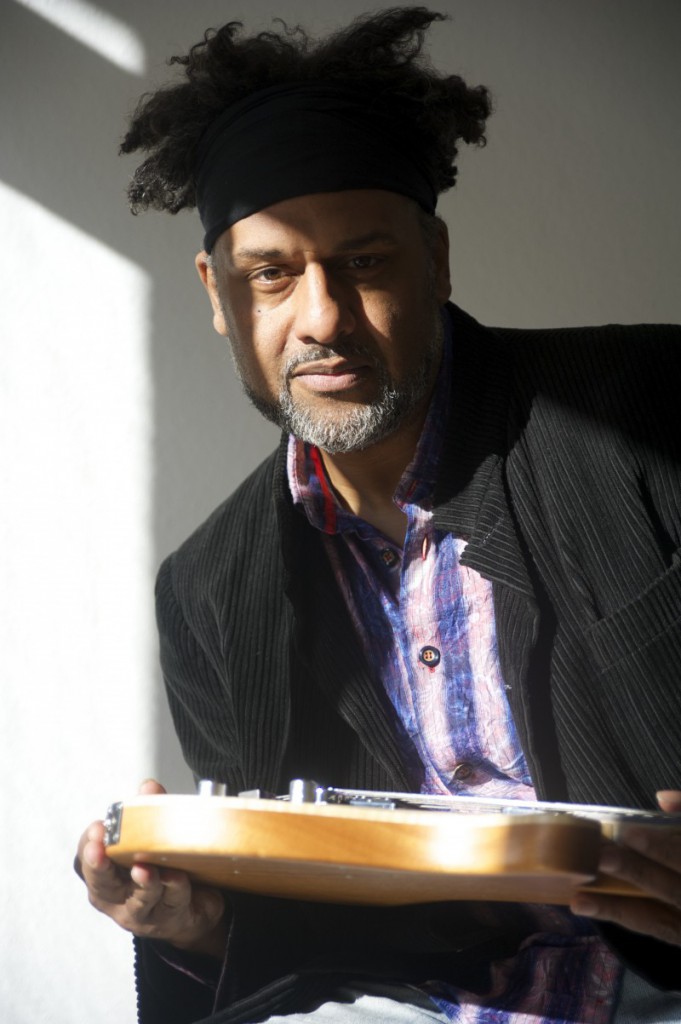 Jean-Paul Bourelly is a musical pioneer and innovator. His music is influenced by the rich culture of Haiti’s migrant community and the southern Afro America culture that he was part of in Chicago. He prefers the guitar and pen. His guitar sound is combustable, deep, and bluesy. He excels at blending traditional and modern concepts with creativity spontaneity. Blues Jazz Rock and Haitian roots His early experiences included the Haitian Kompa group “Chicago Express”, and early jazz experiments with Steve Coleman, Chess Records guitarist Pete Cosey and Nubian influenced Phil Cohran. Von Freeman, a legendary saxophonist, and Bunky Green, a jazz educator. New York At 18 years old, he moved to New York and began working with jazz musicians like Elvin Jones, Muhal Rich Richard Abrams and Pharaoh Sanders. He also recorded with Miles Davis. His early accolades include prominently appearing on Blues Forever, an Abrams album that won Dowm Beat’s record of the Year. He formed his own band. The BluWave Bandits were formed while Bourelly was in New York in 1990’s. His first recording, Jungle Cowboy (JMT), was released by Bourelly. He was preceded by Trippin(Enemy) and then four more consecutive records on Japanese label DIW. Saints and Sinners and Blackadelic Blu.Rock the Carthartic Spirits.and Fade to Cacaphony. His sound was established internationally by this flurry. Funk Concept The original concept of Funk Concept was founded on the vision of expanding the boundaries of funk music through the use of polyrhythms and sonic experimentation using the guitar. He reconnected with Haitian musicians through the roots group Foula and formed Ayibobo, which was an attempt at blending his Haitian world and Afro American world. You can learn more about his work by visiting his various groups. These are his projects that reflect this funk-based sound: BluWave Bandits, 1990-97 Vibe Music, 2003-2005 Gypsys Reloaded 2006. – 2009 CutMotion 2008 Stone Raiders Kiss The Sky Berlin. After moving to Berlin, he felt a renewed desire to create an Afro Modern sound. He would follow this impulse away from American music and towards a more free-flowing sound that draws inspiration from Africa. His association with Abdourahmane diop and his collaboration with Paul Gilroy on “Black Atlantic”, a music and art project in Berlin, and the important African music scenes in Paris and Berlin made this possible. These are his projects: Ayibobo 1992 – 2004 Boom Bop 1996 – 2002 Vibe Music Afro2005 Citizen X – 2008 – 3Kings v1 2006 – 2009 3Kings v2 Blues Waka. In Berlin, he founded several forward-thinking projects such as Boom Bop which featured himself, Abdourahmane diop, and jazz legend Archie Shepp. He formed Stone Raiders, a Power Trio featuring Darryl Jones (Rolling Stones) and Will Calhoun (Living Colour). Bourelly’s idea is rooted in Afro-Atlantic modernity ideal. This is enhanced by strong guitar sounds and a variety of musical references, many of which often sound organic. His music explores the connections between Afro-blues in abstract, deconstructing polyrhythms, creating surrealistic atmospheres, and exploring the new frontiers of electronic music frequencies. His current work is a blend of rhythmic heavy blues and a variety Afro Diasporic musical narratives. His 2014 album 3KINGS “Famous Guys” features his rock guitar navigating, subverting, and finally transforming a traditional Cameroonian Highlife groove. His tapping adds another dimension to his playing through rhythmic tapping. Bourejy’s use of rhythmic tapping echoes other worldly rhythms that are being tapped out from his 7-stringed guitar. Bourelly’s sound has been described as “No Jazz”, “BluWave”,”Free Form Funk”,”Trash Funk”,”Black Rock”,”Voodoo Rock”,”Black Atlantic Funk” and “Next Step”. The Producer/Artist In 2009-2010, he founded the musical laboratory Spontaneous Situation in the Werkstatt der Kulturen. It has since evolved into several spin offs. One was conducting Spontaneous Youth ArKestra in Ballhaus Naunyn 2014, while the other performed a series of Spontaneous town hall meetings with Professor Maisha (Eggers), Auma as part of the project “We Are Tomorrow”. JpGotMangos is the label/production studio that he founded in 2005 to allow him to express his most intimate and indie music ideas. Blog.bourelly.de