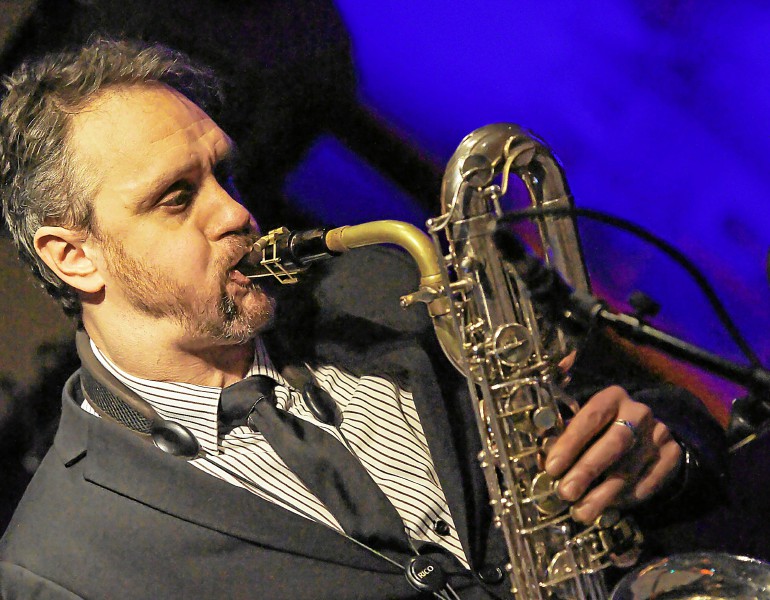 Jean-Philippe Scali, originally from Draguignan, in the Var, began classical saxophone lessons at age 10 at private lessons. He was fascinated by Jazz music and met Yvan Belmondo (4 years later) during a training course. This father of Stephane and Lionel put him on the “rails” of musicianship and gave him the “keys” that allowed him to understand the “language” of Jazz. He joined the Nice Conservatory class at 17 and attended festivals and workshops in the PACA area. He also gave his first concert with local orchestras. He moved to Paris in 2000. He attended the IACP Jazz School, where he was taught by Carine Bonnefoy and Christophe Dal Sasso . He joined the Conservatoire National Superieur de Musique et de Danse de Paris Jazz Class in 2002 and studied with Francois theberge, Riccardo de Fra, Daniel Humair. Glenn Ferris, Herve sellin. He will have the chance to perform and study with, among others, Martial Solal and Paolo Fresu. He graduated in 2006 from the CNSM Jazz and Improvised Music program. Jean-Philippe Scali has been a dynamic leader and sideman since 2006 as an alto saxophonist but also as a baritone. He has recorded and performed with renowned musicians in various forms over the years. Jean-Philippe Scali performs and records on some of the most important stages in Europe (La villette and London Jazz Festival, Nuits de Fourvieres and Marciac, Middelheim etc ). In 2014, the Grammy Award was presented to I Hear The Sound. Jean-Philippe Scali was recently a “guest” at the Archie Shepp “All star 5-tet tribute John Coltrane” festival. This featured Richard Davis, Billy Hart and Jason Moran. He is a member of the Gil Evans Paris Workshop, where he was previously the director of O.N.J 1994-1997. Jean-Philippe Scali, a member of the Amazing Keystone bigband, recorded Pierre et le Loup et le Jazz. This album was awarded by the Academie du Jazz in 2013. He gave concerts with the orchestra over four years (2012-2016) and recorded the Carnaval Jazz des animaux (2015). Also, 3 tracks were included on the Paris album of ZAZ, Charles Aznavour and John Clayton (2014). Jean-Philippe Scali performs with the Paris-Calvi bigband, which is directed by Jean-Loup Longnon. He also records the album R. comme Rene (2015). He is found with Raphael Imbert and his Nine Spirit, performing in various creations such as Watt a Nine Brass Boom featuring the beat-box band Under Kontrol in “Marseille-Provence 2013, European Capital of Culture”. In 2016, he was again at the “Nuits de Fourviere” as part of the creation to homage “Moondog the Viking of the 6th Avenue”, alongside Raphael Imbert and Stephan Eicher. He also appears on two albums by Gaya Music Production’s saxophonist, Samy Thiebault rebirth (2016) and Upanishad Experience (2009). Jean-Philippe Scali participated in two tours that he organised with Walt Weiskopf, the American saxophonist: European sextet tour (2008) and nonet tour (2009). He is also found during a session with Ivan Jullien’s large orchestra (2008). Eric Legnini recorded his first album, Evidence, in 2012. (Gaya Music Production). It was acclaimed by critics. It was broadcast on numerous radio stations (TSF, France Musique and FIP …).). He recorded a second album, Low Down, in 2016 with his quintet with American trombonist Glenn Ferris. Jean-Philippe founded the Hot Sugar Band in 2010 with six musicians. This is a traditional swing jazz group for Lindy Hop (swing dance of 30-40s). The septet, which specializes in the discipline, is one of the most well-known in Europe among swing dancers. It performs in almost fifteen countries in Europe, as well as in Canada, China and South Korea. Jean-Philippe is also sought after for various writing projects. He created a composition for trombone and percussion quartet called Nougaro facon trombone as part of “Jazz sur son 31”. This was followed by a series educational concerts in rural villages in the Haute Garonne. He was asked to orchestrate and arrange a gala piece in 2013 for the Coup de vent Orchestra, conducted by Philippe Langlet, as part of the Lille International Composition Competition. He has also arranged for large and medium-sized Jazz bands such as the Amazing Keystone bigband and septet, or the Attica Blues huge-band. Jean-Philippe Scali teaches saxophone, jazz piano since 2008. He is also responsible for the supervision of the Jazz workshops at the Conservatoire a rayonnement commun de Taverny (Val d’Oise), and participates in many exam and competition jurys. From www.selmer.fr