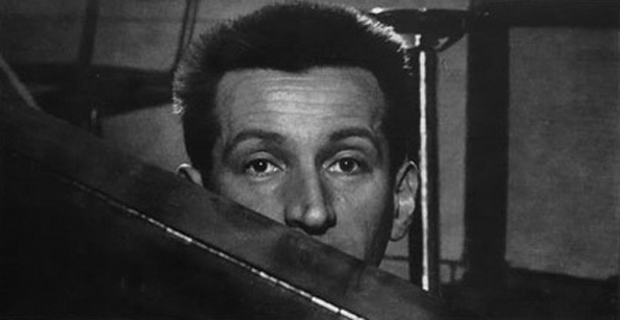 When Jean-François Quiévreux aka Jef Gilson died in February 2012, he was still unknown to most of his French countrymen, even to many of the French jazz world. Yet he began his professional career in the mid-’40s alongside Boris Vian, the famed novelist/musician who connected Duke Ellington and Miles Davis with the French scene, and remained in the game until 2002. In Gilson’s fifty-year career, he did virtually all possible jobs in music: composer, conductor, arranger, vinyl-cutter, pianist, singer, writer, sound engineer, producer, teacher, theorist, and label manager. During those fifty years, the French pioneer was either ahead of his time or consciously old fashioned. Who else in France can claim to have played bebop, modal, religious, Eastern, free, Afro, spiritual, blues, big band… And all of them using his own compositions, as Gilson almost never recorded standards. As a talent spotter, Gilson was the equal of Miles Davis, bringing forth numerous soon-to-be famous talents. In the ’60s, Jef Gilson introduced the jazz world to Henri Texier (who joined his orchestra when he was only sixteen!), Jean-Luc Ponty, Bernard Lubat, Michel Portal, François Tusques, Eddy Louiss, Christian Vander, and many other celebrated French instrumentalists. Gilson was the man young American musicians in Paris turned to for help and collaboration. Lloyd Miller, Nathan Davis, Woody Shaw, Philly Joe Jones, Bill Coleman, Sahib Shihab, Hal Singer, Byard Lancaster, Khan Jamal, David Murray, and Joe McPhee all spent time, recorded, or toured with Gilson during their time in France. In 1965, during the Antibes/Juan Les Pins festival, Gilson opened for Coltrane and advised him backstage to perform the full suite of A Love Supreme. It was the only time Coltrane would play it onstage with his original quartet. In the meantime, Gilson was a singer in the famous Double Six of Mimi Perrin (long before Daft Punk, Les Double Six were nominated for the Best Vocal Performance Grammy Award, but in 1965 had the misfortune to be up against a quartet known as the Beatles). His recording studio in Paris was a hub of activity in the ’70s: Archie Shepp, Randy Weston, Martial Solal, Roscoe Mitchell, Leo Smith’s Creative Orchestra, Steve Lacy, and Steve Potts all went to record their albums there. In 1972, Gilson also founded his Palm Records label, whose LP catalog of free and avant-garde jazz (Byard Lancaster, David S. Ware, François Jeanneau, David Murray, Jacques Thollot, etc.) is now often sold for three-figure prices on the collectors’ market. Today, two years after he passed away, Gilson’s music echoes at last far beyond the French borders. Electronic music genius Four Tet sampled, remixed, and compiled his music, Thurston Moore collects his original pressings, journalist and DJ Gilles Peterson regularly praises his recordings. And last but not least, the respected English label Jazzman Records has uncovered previously unheard works from the French jazz pianist and composer and packaged them for a new generation in several beautiful compilations: The Archives (100% unheard ’60s jazz), Chansons de Jazz (Saint Germain des Prés-esque vocal jazz), and Jef Gilson et Malagasy (deep Afro/spiritual jazz). from http://www.waxpoetics.com/