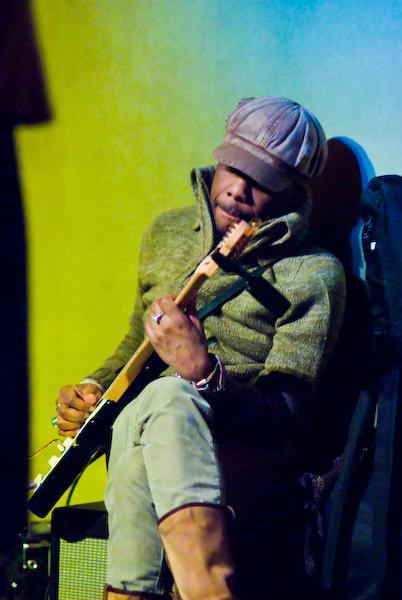 Jef Lee Johnson is one of those unsung genius guitarists who have haunted the history of the instrument. He isn’t exactly a hero story. His life was filled with brilliant musicians who work in local clubs and are often unknown outside of his hometown. Johnson was well-respected enough to have worked alongside: Al Jarreau and Patti Labelle; Erykah Badu, D’Angelo and Mariah Carey; Stanley Clarke; Aretha Franklin; Ronald Shannon Jackson; McCoy Tyner; Esperanza Spalding; Chaka Khan, David Sanborn and many others. This is a story about a talent that never made it big as a solo artist and failed to get the greater recognition due to your name on the marquee. Johnson was born in Philadelphia, June 26, 1958. He is the youngest child in a musical family. Johnson was heavily influenced by Eric Dolphy’s music, Motown, Sergio Mendes and Leonard Bernstein. “I was listening to TV, cartoon music, Johnny Quest, ‘Warner Bros stuff. Anything with a guitar, I gravitated to Roy Clark, Hee Haw, and Buck Owens. I’m referring to commercials: Miller High Life is the Champagne of Bottled Beers. His guitar style was marked by extreme eclecticism. It included gutbucket and pedal steel licks, Amos Garrett-style multistring bends, and bebop runs. Johnson was inspired to learn fusion and electric Chicago Blues in the 1970s. He also began playing in bands with his friends. As a teenager, Johnson would support groups such as Blue Magic, Sister Sledge and Archie Bell.