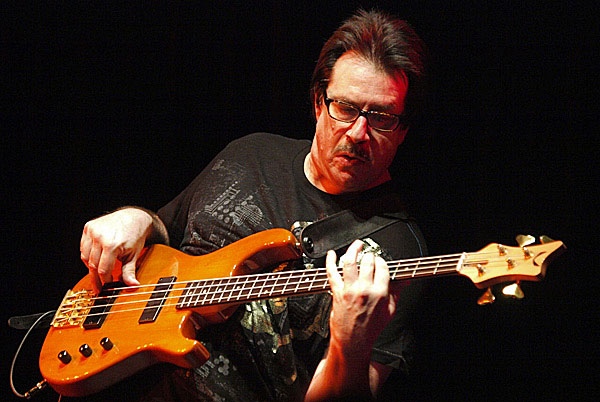 Jeff Berlin is a versatile and powerful electric bassist. He has been a major fusion bassist ever since the mid-’70s. His mother was a pianist and his father sang opera. Berlin received nine years of violin lessons beginning at age five. He was regarded as a child prodigy and appeared with orchestras in New York City. At 14 years old, he changed his direction and started playing electric bass. Jack Bruce was his hero. Berlin studied at the Berklee College of Music and returned to New York. He was briefly in a trio with Tony Williams and Allan Holdsworth for a brief period. He recorded in Europe in 1975 with Yes keyboardist Patrick Moraz. After that, he moved to New York and became very busy with studio work and club dates. Many top musicians, including Pat Martino and Gil Evans, Toots Thelemans, Al DiMela, George Benson. Earl Klugh. Larry Coryell. Dave Liebman. Ray Barretto. For a few years, Jeff Berlin was a regular member Bill Bruford’s band that included Allan Holdsworth. Four recordings were made. Berlin moved to Los Angeles and worked with Scott Henderson, Frank Gambale, and became an educator. He also played rock with Frank Zappa and declined an offer to join Van Halen. Berlin recorded two fusion/rock shows for the now-defunct Passport label in 1985 and 1986. In 1990, he moved to Florida and has since toured extensively with Yes, John McLaughlin and Billy Cobham. He also founded and teaches at The Players School. The 1997 set Taking Notes For Denon, his third as a leader, is Jeff Berlin’s most jazz-oriented set. Text contributed by users is available under Creative Commons By–SA License. It may also be available under GNU FDL.