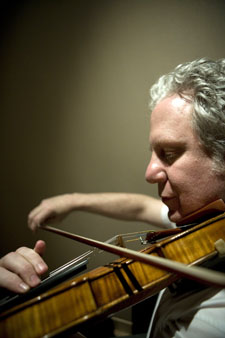 Jeff Gauthier is a composer, producer and improvising violinist who was born in West Los Angeles. He first learned to play a violin in grade school. Gauthier was first taught by his aunt to play the violin. He then began studying it with Armand Roth who holds the first chair in the Los Angeles Philharmonic. Gauthier was captivated by the improvisational skills of hard rock musicians like Jimi Hendrix, Cream, and this led to him pursuing jazz fusion during Miles Davis’ Bitches Brew. After graduating from high school in Beverly Hills, Gauthier went on to study music and violin at the California Institute of Arts. His professional career has been varied and rich. He has worked with artists such as Vinny Golia and John Cale as well as the Milwaukee Symphony, Los Angeles Chamber Orchestra and the Long Beach Symphony. He is still passionate about jazz and improvisation. He founded and continues to be a member of Quartet Music. He was also instrumental in the founding of the Nine Winds and Delos records labels and, in 1998, Cryptogramophone, which is perhaps the most forward-thinking jazz imprint on the market. Gauthier has received numerous awards, including two NEA grants. He has also contributed to many television and film soundtracks, most notably the Star Trek dynasty. His albums include 1993’s Internal Memo and The Present on Nine Winds and 2002’s Mask and 2006’s One and the Same on Cryptogramphone. House of Return was the third album released on Cryptogramphone in 2008.