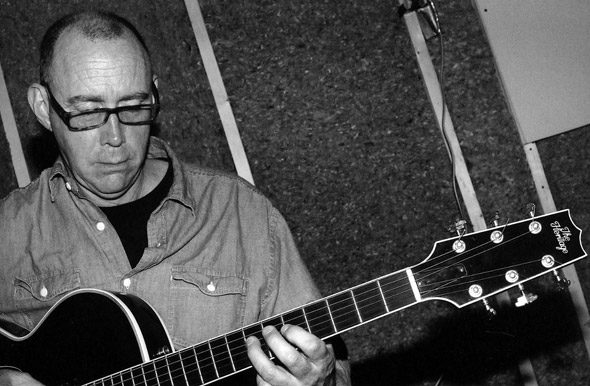 Jeff Platz is a guitarist and composer who has toured extensively in the U.S.A. and Europe. He has appeared at various festivals around the world, including New York’s “What is Jazz” festival, Heidelberg’s “Heidelberg Jazz Festival” in Heidelberg Germany, Amsterdam’s Crossing Borders festival and Munster International Jazz Festival in Munster Germany. Wolf Kampmann, a Berlin-based music journalist writes that “Platz’s music has a generous but never accidental quality.” Platz’s playful use and enjoyment of familiar things, where intuition, feeling and memory are the most important navigational tools, is what gives the music its uninhibited quality. Jeff is also the co-manager of Skycap Records, a German music label. He organized the first U.S.-based Skycap Music Festival in November 2005, featuring recently recorded Skycap artists like Joe Morris, Steve Lantner, and Jim Hobbs. Jeff’s latest quartet, “Panoramic”, was released in May 2010. It features Daniel Carter, a New York City legend on trumpet and reeds. Free Jazz.com says that the ensemble is “a marvelous example of cohesive playing, total sound, and full of lyricism.” Downbeat magazine recently reviewedPlatz’s group and said that it was “truly amazing” and “on fire!” Platz was awarded a grant by the city of Muenster, Germany in July 2010 for Werkstadt Tage. This festival is multi-media arts. Platz and visual artists will present a music score for live improvisation in November 2010. The short film will focus on the individual perspectives of Muenster artists. http://jeffplatz.com