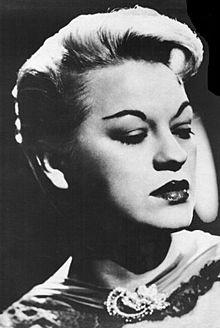 Wikipedia: Genevieve Lillian Hering (August 5, 1926 to August 4, 1991), was a jazz singer and pianist. Biography Hering was born in Royal, Nebraska. She began playing piano when she was three years old and started studying classical piano at six years old. Hering studied voice and classical piano at Sacred Heart College in Omaha, Nebraska. This is where she discovered jazz. She began her career at Omaha’s Blackstone Hotel. She worked as a support vocalist for Anita O’Day in Chicago clubs in the late 1940s. Her songs that could be called torch songs made her famous. Decca Records signed her in 1951, and she became well-known for jazz and pop music. She was at her peak in the 1950s. She sang in a few movies during that decade, and she had a hit single with “Fire Down Below” in 1957. She had great success with Capitol Records’ Cole Porter interpretations, with Billy May arranging some of her more funny examples. She quit music in the 1960s to study and then moved to Hollywood to begin film composition with Hugo Friedhofer. During her final years, she also wrote Interpreting Popular Music at The Keyboard. In 1991, she died in Los Angeles from pneumonia. Text contributed by users is available under Creative Commons By–SA License. It may also be available under GNU FDL.