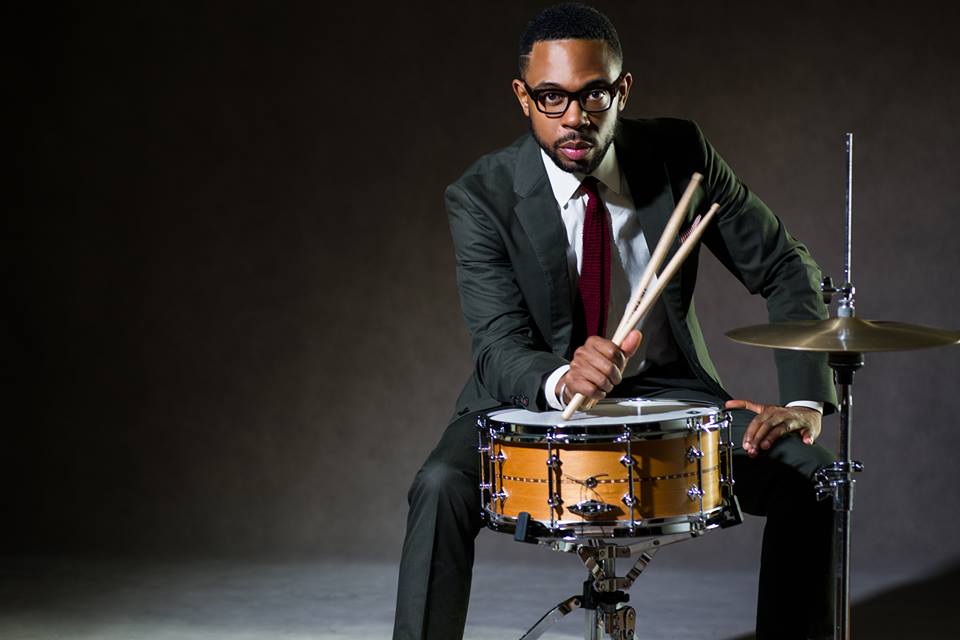 Jerome Jennings is a drummer. His words are simple but his sound is powerful. Anyone who has seen him perform knows that he is the master of his music. There are no missed beats or breaks. Every sound and every moment of silence has a purpose. It is impossible to hear his playing and not feel his intensity. Jennings is a rhythmic speaker. The best recipe for great music is the interaction between sound and emotion. Jerome is a firm believer in education and striving for excellence. He graduated from Rutgers University Mason Gross School of the performing arts in 2004. Jerome was awarded a MM by the Juilliard School in Manhattan, NY during the summer 2007. Jennings was the first Jazz Studies recipient from Juilliard’s Morse Fellowship. This program brings the performing arts to New York City schools students and teachers through annual artist residencies. Morse Fellows create their own curriculum and lead two classes per week in local schools throughout the academic year. This innovative program provides music instruction in schools that are not well served by the arts. It also gives Juilliard students the chance to become teachers. Jerome is passionate about history. Under the guidance of Phil Schaap Jerome, a historian, professor, disc jockey and producer, Jerome completed Jazz At Lincoln Center’s Swing University301 course. This is the most thorough study of jazz from an non-performance perspective. Jazz At Lincoln Center has Jerome Jennings as an acknowledged jazz scholar. Jerome Jennings, a performer, is an internationally-traveled artist whose distinctive sound reflects a strong connection to jazz tradition, soul music and hip hop. He is currently playing with Christian McBride, Christian Sands and the Christian McBride trio. Bria Skonberg, a dynamic singer and trumpeter, is another favorite of his. Jerome has a passion and deep investment in jazz education. He has played at every major Jazz club in New York City, including Birdland, Birdland, The BlueNote, Dizzy’s Club Coca Cola, as well as The Village Vanguard, Birdland and Birdland. He has performed and traveled to over 25 countries. Jerome Jennings is a volunteer who teaches, conducts clinics and reaches out to youth through Jazz at Lincoln Center’s Jazz for Young People program. He also serves as a teen mentor, coach, and instructor at NJPAC (New Jersey Performing Arts Center). He is also an ensemble leader and instructor for Lincoln Centers JALCYO (“Jazz At Lincoln Center Youth Orchestra”) programs. Jerome is a relevant performer as always. Jerome is a performer in numerous clubs and concert halls across the country and internationally, along with many accomplished artists. To date Jerome has/is performing/recording/ touring with; Sonny Rollins, Hank Jones, Christian McBride, The Count Basie Orchestra, Large Professor, Wynton Marsalis (nu003ca class=”__cf_email__” data-cfemail=”703a303c33″ href=”/cdn-cgi/l/email-protection”u003en [email protected]nu003c/au003en), Dee Dee Bridgewater. Hamiet Bluiett. Freddy Cole. Paula West. Ernestine Anderson. Craig Handy. Davell Crawford. Houston Person. Mike “Philly” Phillips. Slide Hampton. Benny Golson. Gerald Wilson. Tim Reis. BernardFowler. Benny Powell. The Mingus Big Band. Ronnie Mathews. Curtis Fuller. Valery Ponomarev. from www.jeromejennings.com