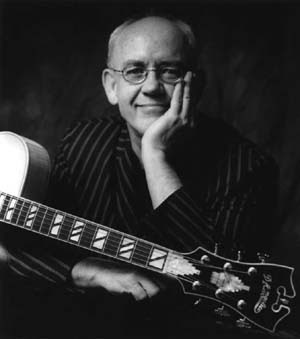 Jerry is a jazz guitarist who has been praised for his contributions to the emerging fusion movement. At age 7, he began playing guitar. He began playing professionally at age 11. Jerry moved to San Francisco at the age 21. He joined the John Handy Quintet in 1964, and recorded two albums for Columbia Records, including the critically-acclaimed “Live at Monterey.” He recorded “The Jerry Hahn Quintet,” his first album for Arhoolie Records in 1967 with Jack DeJohnette as drums. He joined the Gary Burton Quartet in 1968 with Roy Haynes, Steve Swallow and recorded three albums. They also toured the United States, Europe and Canada. The Jerry Hahn Brotherhood was founded in 1970 with Mike Finnigan. They toured, recorded and performed for Columbia Records. Joachim Berendt, a German-born jazz expert, noted that the Jerry Hahn Brotherhood was one of the “trailblazers” of rock-jazz integration in his book The Jazz Book. Jerry began writing a monthly column in Guitar Player magazine called “Jerry Hahn’s Guitar Seminar”, which lasted for five years. Paul Simon asked Jerry to record his first solo album, “Paul Simon”, in 1971. Jerry returned to Wichita in Kansas in 1972. He was a full-time faculty member at Wichita State University and created the jazz guitar degree program. In 1983, he received a Doctor of Music from Berean Christian College, Long Beach, CA. Since 1986, his acclaimed book and CD Complete Jerry Hahn Method to Jazz Guitar for Mel Bay Publications have been published. Jerry moved to Portland, Oregon after 15 years at WSU. He joined the Bennie Wallace Quartet and recorded and toured the United States, Europe, and Japan. Jerry’s guitar playing is featured in the move sound track for White Men Can’t Jump. He moved to Denver in Colorado in 1992, where he taught at Colorado Institute of Art. He also performed, toured, and recorded with Ginger Baker (drummer with “Cream”). Jerry joined the faculty at Portland State University in 1995 and created the Jazz Guitar curriculum. Jerry taught all the jazz guitar students at PSU and also coached jazz combos and ensembles. He continued to perform, record and tour, and conducted clinics at schools and universities. Recent performances include the Iridium Jazz Club in New York City and Dizzy’s Club Coca-Cola, New York City, with the original John Handy Quartet. His most recent recordings include “Hahn Solo”, “Jazz Hymns”, and the self-published “Hahn Songs”, both on Migration Records. Jerry returned to Kansas to spend time with his family and to work on new publications. Jerry Hahn is a dedicated and innovative musician who continues to be a favorite of a younger generation. From www.jerryhahn.com