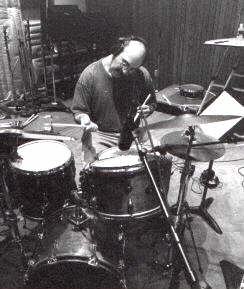 Jerry Kalaf is a long-standing member of the jazz community. He has performed and toured with Eddie Harris and Gary Burton as well as Frank Strazzeri and Bill Perkins. As musical director of Jazz Tap Ensemble, Jerry has performed in Europe, Asia and South America. He also performed at the Playboy Jazz Festival in Los Angeles and Salzburg Jazz festival, Salzburg Austria. In New York, he was at Carnegie Hall, The Joyce, and Apollo Theaters. Jerry was awarded a “Meet The Composer/California” grant from the National Endowment For The Arts, and the California Arts Council. His recording “Just Like Old Times”, which features eight Jerry compositions, is a collaboration between Doug Walter and Jerry. These arrangements are challenging and inspiring for a trio consisting of bass, drums, and piano. They also show two sides to Jazz Composition: the interpretation and response of the written note as well as the improvisational musician. He continues to record and write original compositions. from www.colburnschool.edu