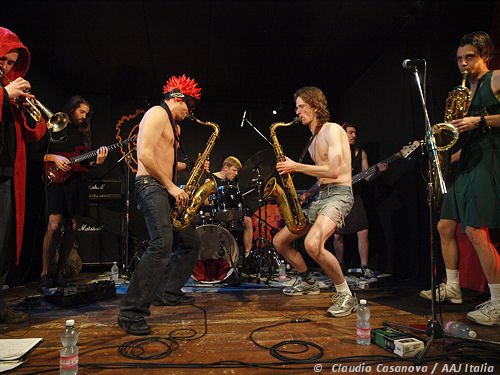 Jerseyband is a group of two tenor and baritone saxes, trumpet, baritone, bass, guitar and drums. They play “lungcore”, a new genre that fuses a horn-driven band’s heavy metal sensibilities with a horn-driven one. Jerseyband was founded in 1999 and explores jazz styles and textures that are not typical. They avoid the “head solo head” song forms and use vocal screaming, slap tongue and perverse orchestration. Imagine three saxophones representing the three bottom strings of a distorted guitar, playing power chords. Although they are serious about their ability to execute whirlwind passages with odd rhythms or difficult runs flawlessly, there is always a sense of humor throughout their show. Their performances are based on the principle of “don’t take yourselves too seriously”. They use costumes, stage choreography, and occasionally interpretive dances. “Forever Hammer”, their 7th independent album, is due to be released in early 2012. It features detuned guitarists and their regular mix guttural bowel loosening and horn lines. From facebook